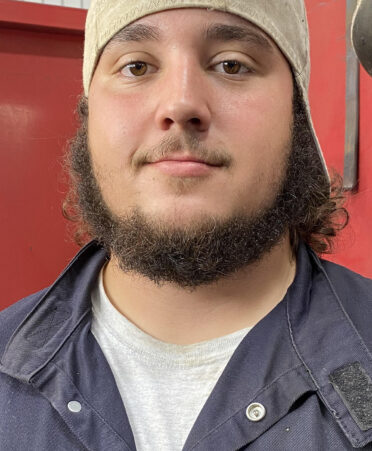 (BRECKENRIDGE, Texas) – One day while working on the family ranch, J.T. Caraway found a welding rod. It ignited a passion for welding that has continued ever since.
This month, Caraway is a candidate to graduate with a certificate of completion in Welding Technology at Texas State Technical College. He said learning more about welding was the best decision he could have made for himself and his family.
“I always thought I would become an electrician,” he said. “When I found that welding rod, it stuck with me, and I found a love for welding.”
Caraway took his newfound passion into the welding shop at Breckenridge High School and eventually to TSTC after talking to Stephen Hope, a welding instructor at the college.
“Talking to Stephen made the decision to come to school easier. He told me I would be able to learn more and be able to get a good job,” he said.
Caraway said working in the lab has helped him learn at his own pace.
“The instructors have taken what I have known best and fine-tuned it to make me a better welder,” he said. “That has given me an extra boost in confidence.”
Caraway said he has two options after graduation, and Hope sees one of them as his best path.
“A person in J.T.’s position is good for the pipeline jobs. He will be able to travel, and I know he will make good money,” Hope said. “By doing that, he will be able to see a lot of different places outside of a family vacation.”
Caraway said he is leaning toward the pipeline welding field in order to travel. His second option will be returning to work in his hometown of Breckenridge. However, Caraway does have one goal in mind when it comes to his career.
“I would like to build a company and get my name out there for people to see I am able to do a good job,” he said.
Caraway said that goal can be reached, thanks to the welding instructors in West Texas.
“All of the instructors have our backs. They have shown us how the industry works,” he said.
According to onetonline.org, more than 54,400 welders were employed in Texas as of 2018. By 2028, the number of welders is forecast to be more than 61,000, a 13% increase. The average annual salary for welders in Texas is $45,250, according to the website.
TSTC offers an Associate of Applied Science degree in Welding Technology, as well as certificates of completion in structural and pipe welding. The program is part of TSTC’s Money-Back Guarantee program, which refunds a participating graduate’s tuition if they have not found a job in their field within six months of graduation.
Registration for the fall semester is underway. Scholarships are available. For more information, visit tstc.edu.