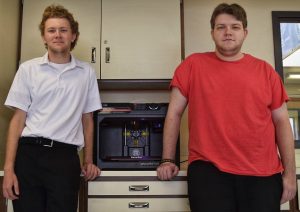 (WACO, Texas) – Two Mechanical/Electrical Drafting Technology students at Texas State Technical College will be the first to represent the Waco campus in the Additive Manufacturing contest at the 55th annual SkillsUSA National Leadership and Skills Conference in late June in Kentucky.

Brandon Lund of Millsap and Cody White of China Spring were put together as a team by their instructor, Bryan Clark. Clark said he liked Lund’s interest in 3D printing and White’s machining background.

The students will find out what their competition project is during the conference’s contest orientation.

“We have the best of both worlds,” Clark said.

Lund and White earned their way to the national conference by placing first in the SkillsUSA Texas Postsecondary State Leadership and Skills Conference in April in Waco. During the state Additive Manufacturing contest, the students had to design, print and demonstrate a coin-flipping apparatus. Their project had to be 3D printed in less than two hours.

The students went through nine prototypes before finding a winning combination.

Lund said he became interested at age 18 in 3D printing, a component of additive manufacturing, when he saw it being used for a video game prop.

“You need spatial awareness,” he said. “You have to visualize something in 2D and 3D at the same time.”

White has an Associate of Applied Science degree in Precision Machining Technology from TSTC and said after working in the field for less than a year that he wanted to get technical drafting experience. He said he had never used a 3D printer before coming to TSTC.

“You want to understand how products will be made,” he said. “You need to be concerned with machine time with 3D printing.”

Clark said the students have plenty to be excited about in the future of 3D printing.

“These guys will be incredibly valuable,” Clark said. “The need for people to model and design in the virtual world is becoming more necessary.”

The military and the automotive, construction and health care industries are some of the areas where 3D printing is being used.

“The whole industry is in a phase of dramatic growth,” Clark said. “There will come a day when you have a 3D printer like you do a microwave.”