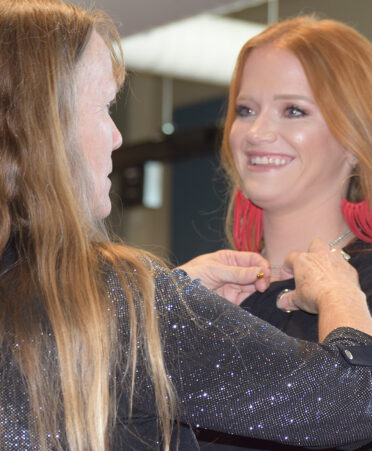 Tucker, of Westbrook, said having her entire family present when she received her nursing pin and diploma was important. She earned her vocational nursing certificate this month and plans to return to TSTC to begin the Associate Degree Nursing program in the near future.

“Today has been overwhelming for me,” she said of graduation day. “I would not have gotten this far without my family.”

Tucker admitted that she faced challenges during the program. Those challenges ranged from raising her three children to facing different situations during clinicals. There were also some humorous moments that she shared during the pinning ceremony.

“My funniest nursing school memory was that time I continued to wave my badge to open one of the hospital doors but forgot you still had to push the door open to open it,” she said.

She continues to laugh about that event, which happened at Cogdell Memorial Hospital in Snyder, adding, “Nursing school takes all of your common sense.”

Tucker’s mother and stepfather, Belinda and J.D. Rogers, drove from New Mexico to see their daughter honored during the ceremony, as well as being recognized as a Phi Theta Kappa honor society member and being named to the Scholastic Excellence honor roll.

“It is awesome to see her life come together, because she has been through a lot,” J.D. Rogers said.

Belinda Rogers never doubted that her daughter would graduate – and with honors.

“She has been so driven to finish. I knew when she set her mind to it, she would be a success,” she said.

For Blake Tucker, Blaine Tucker’s father, it was a first for his side of the family.

“She is the first person in my immediate family to go to college and finish,” he said. “I am proud of her decision to become a nurse, and I cannot wait to see what happens during her next journey.”

Blaine Tucker’s decision to enter the nursing field was inspired during her pregnancies. She said each was difficult, but having “monumental nurses” watching her led to the career choice.

“I knew I needed to pay it forward and help people,” she said, adding that a career in a maternity ward could be in her future.

Instructor Joan Coldiron said Tucker will be successful no matter which direction she chooses.

“From the first time I met her, she made a great impression on me,” she said. “She is a very dedicated and hard-working person who will do a good job helping others.”

Tucker said graduation night ended one “whirlwind” experience and she is ready for the next.

“I am so very thankful to each and every person who believed in me and pushed me along the way,” she said. “The last 16 months have come with a whirlwind of emotions, trials, hardships and amazing experiences. I would not have made it through without all of the people God put in my corner.”

TSTC’s Vocational Nursing certificate program is available at the Breckenridge, Harlingen and Sweetwater campuses. Upon completion of the program and passing the National Council Licensure Examination, graduates are classified as licensed vocational nurses (LVNs).

According to onetonline.org, LVN jobs are forecast to increase 11% in Texas by 2028, with more than 82,000 nurses in the workforce. The median salary for LVNs in Texas is $47,760, the website showed.