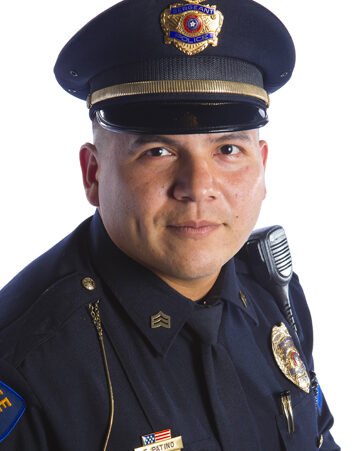 TSTC welcomes in the New Year with a new police chief

Patiño, who will celebrate 10 years at TSTC in June, served as sergeant for the force for the past six years, and beat out a competitive group of applicants and a few law enforcement officials with supervisory experience in cities with more than 50,000 people during the national search and rigorous interview process.

“I found out right before Christmas. It was the greatest gift I could have received,” said the 34-year-old. “Never in a million years did I think I would be in this position.”

TSTC Police Commissioner Aurelio Torres said Patiño was one of six candidates selected and interviewed on competences identified as critical for a college police chief.

“Patiño has made an impact since day one,” said Torres. “His experience in college law enforcement and familiarity to unique college safety and security requirements set him apart from the rest.”

Torres added that Patiño has the ability to train and direct staff and ensure that they live up to TSTC’s core values of excellence, accountability, integrity and service.

Patiño, a San Benito native, was one of eight children and said it was his eldest brother who instilled a hard working nature in him after losing his mother at only 4-years-old.

“My brother took us all under his wing and made sure we didn’t take the wrong path,” he said. “He always stressed the importance of working hard and getting an education. He’s one of my greatest supporters.”

It was during Patiño’s time with Bekins Gulf Transport and Storage as a truck driver that he began to gain an interest in law enforcement.

“Truck drivers get stopped for random checks. So, I would get to talking to the police officer or state trooper and my interest for the field began to grow,” said Patiño. “After one of my trips I told my wife that I was thinking of pursuing law enforcement and she supported me wholeheartedly.”

In 2008 Patiño graduated from the Lower Rio Grande Valley Development Council Police Academy at TSTC second in his class for his academic achievement.

“This career has been so rewarding for me and my family,” he said. “It has been life changing and only possible thanks to the support from my wife, family, TSTC colleagues and leadership.”

After the police academy, Patiño went on to earn an associate degree from Texas Southmost College in Criminal Justice and will complete his bachelor’s degree in the same field this spring.

Patiño said he has found a home at TSTC – a place he can see himself for the next 20 or more years.

“I’ve had so much opportunity and growth thanks to TSTC and my team,” said Patiño. “We all work hard to make sure that TSTC is not only a great place to work, but also a great place to study and a. A safe place.”

Patiño is known to be self-driven among colleagues for the short-term and long-term goals he sets for himself and the department, and he said it’ll be no different in his new leadership position.

“It’s these goals that allow me to continue pushing forward,” he said. “And I hope to not only continue serving and protecting our TSTC community, but to find new innovative technology that can help us do this.”

He added that he hopes to uphold the high standards of professionalism that Commissioner Torres held for his officers as chief.

“I’ve learned so much from him. He is a true leader, role model and a great supervisor. I have big shoes to fill,” said Patiño. “I’m excited to see what the future holds for me, our department and my colleagues. It’ll be hard work, but for now the best thing is knowing that my 6-year-old thinks I’m cool.”