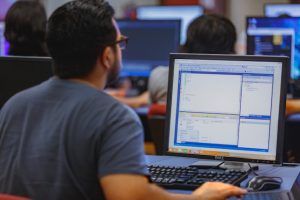 Last spring, the program moved all of its classes online. Due to this, the college’s programs that were physically on five of TSTC’s campuses combined into one statewide unit. This means instructors are not tethered to one geographic campus to teach, but rather can work with students online from throughout Texas.

Phyllis Hollingshead, an instructor in TSTC’s Computer Programming Technology program, said she is teaching 60 students this semester in the Introduction to C++ Programming class.

“Now that we have moved fully online, I feel the program will grow,” she said. “Computer programmers are needed everywhere, even in East Texas.”

“Students willing to move to Austin, Dallas or Houston can make even more,” Hollingshead said.

Shannon Ferguson, statewide lead instructor in TSTC’s Computer Programming Technology program, said Citibank and Texas Farm Bureau are among the companies that have hired the college’s graduates in the past.

“We hope to promote our graduates and get them into companies in that area,” Ferguson said.