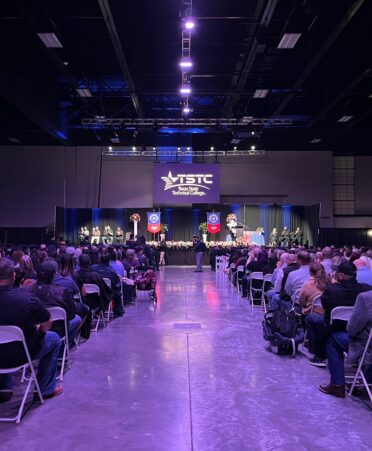 Jerome Mendias, associate provost of TSTC’s Waco campus, said the gathering of relatives and friends during the holiday season made the graduation ceremony more festive.

“I will miss the people,” he said. “From day one, it was a comfortable environment.”

Asbury said the graduation ceremony had a lot of meaning to him because he did not get to take part in a ceremony in high school because he graduated in 2020 during the height of the COVID-19 pandemic.

Asbury will begin work this month as a service technician at RDO Equipment Co. in Pflugerville.

“It takes the pressure off,” he said about having a job. “It feels so much better rolling into it after having done the internship process there. I am taking the next step in the company without starting over.”

Alejandro Torres Jr., of Corsicana, received an Associate of Applied Science degree in Automotive Technology. He said he will miss his classmates and instructors.

Torres became interested in the automotive field while attending Corsicana High School and participating in SkillsUSA.

He began work as a heavy-line repairman in November at Frank Kent Country in Corsicana.

“It is pretty fast-paced, and I like that,” Torres said.

Treviania Kirkpatrick, of Waco, received a certificate of completion from the Culinary Arts program. She said she enjoyed working in the student-run restaurant during the fall semester. She plans to return next year to finish work for an Associate of Applied Science degree in Culinary Arts.

She said she was inspired to pursue culinary arts by her great-grandfather, who was a chef in the military and later worked at George’s Restaurant & Bar in Waco.

Kirkpatrick is working as a baker at The Delaney at Lake Waco, a senior living facility.

Some graduates are still job hunting.

Terry Skaggs, of Temple, received a certificate of completion in Electrical Lineworker and Management Technology. He said he chose his field of study for the high risk and high rewards it provides.

“I’m ready to get on with my future,” Skaggs said.

Watching him cross the stage were his parents and girlfriend. Skaggs said they would celebrate after the ceremony by going out to eat. He wants to stay in Central Texas to work.