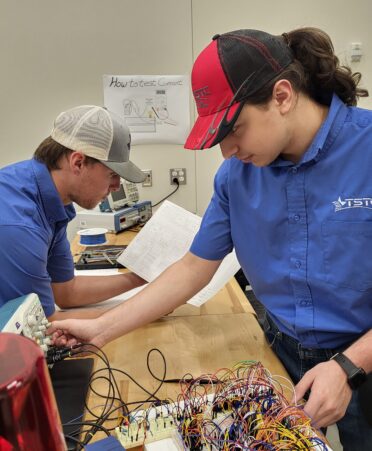 Two TSTC students go above and beyond with a semester project

(ROSENBERG, Texas) – While every student at Texas State Technical College is exceptional, occasionally there are one or two students who go above and beyond what is expected of them. Ethan Brasseaux and Philip Haas are two such students.

Brasseaux and Haas are both in the Electrical Power and Controls program at the Fort Bend County campus. In this program, third-semester students typically are assigned a project to complete that incorporates the lessons, techniques and skills they have learned up to that point. The usual project is a digital electronic game.

Brasseaux and Haas decided they wanted to try something different.

“We were up for something that was a little more challenging,” Haas said. “It turned into something a bit crazier than that. But looking back now, it was kinda fun to do everything.”

For their project, they built a digital clock in combination with a logic decoder to detect an event and set off a light. They began by designing blueprints and schematics. Each wire and panel had to be accounted for in order for the clock to run and the decoder to set off the alarm. The goal was to have the logic decoder recognize when the clock hit a certain time and set off the light, much in the same way an alarm clock would.

When asked what they learned from working on the project, Brasseaux responded that it took patience.

“It involved a lot of repetition,” he said. “There are about four 4-by-4 centimeter chips that are all the exact same thing, just segmented throughout,” he said. “It has taught me that projects take a lot of patience.”

“Taking your time, always looking back, looking for different ways to go about things” he said. “Troubleshooting and making sure everything is right is key.”

All of the tools and techniques they had learned during their last three semesters came together in the project. It involved a variety of electrical components, including direct current power supplies, signal generators, digital multimeters, oscilloscopes, logic probes, electronics components, and other items as the need arose.

Both Brasseaux and Haas were grateful for the opportunity to work on the project. Brasseaux admitted that one of the main reasons he chose the Electrical Power and Controls program was because of these in-person projects and teachings.

Jonathan Bonkoske, the lead instructor for the EPC program, expressed his admiration for the two.

“Ethan and Philip weren’t anticipating the complexity of the completed design and the soft skills required to see it to completion,” he said. “Patience, perseverance, and a never-give-up work ethic gave them the drive to put in lengthy overtime hours to achieve their goal.”

TSTC offers an Associate of Applied Science degree in Electrical Power and Controls at the Abilene, Fort Bend County, North Texas and Waco campuses. The program is one of nine Money-Back Guarantee programs in which tuition is refunded if the participating graduate has not found employment in their field of study within six months of graduation.

According to onetonline.org, electrical and electronic engineering technologists and technicians in Texas can earn a median salary of $63,260 a year. The website projected that there would be a 14% increase in the number of such jobs in the state from 2020 to 2030.

Registration for TSTC’s spring semester is underway. For more information, go to tstc.edu.