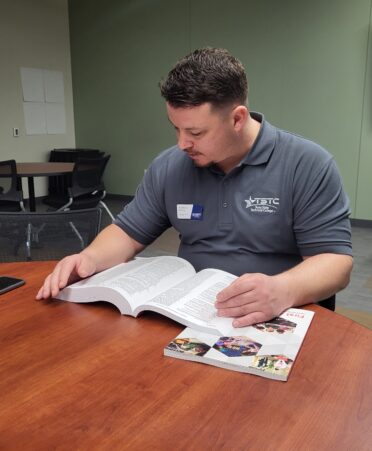 Veteran finds his footing after the military at TSTC

(ROSENBERG, Texas) – For Matthew Young, Texas State Technical College provided not only education, but also a place of direction for his career after the military.

When he got out of the army in 2011, he struggled in finding a direction to move forward. He ended up getting a job in the oil field and working off the coast in the Gulf of Mexico. He found a passion for the work and continued to find various oil field jobs throughout the years.

He continued working until 2017, when he ran into some personal difficulties. A friend suggested continuing his education with the benefits he had from his time in the military. Young began looking through his benefits and options, and he was led to TSTC by another veteran.

“The best information that a veteran gets is through another veteran,” shared Young. “I met a guy (who) told me about TSTC. He said, ‘Hey, I’m going here and utilizing my education benefits.’ So I started looking at the programs.”

Initially Young wanted to be an electrical lineworker. He took a tour of the Fort Bend County campus with a member of the TSTC Veteran Recruitment program, Kenneth Buford, another veteran. Buford and Young went through the various programs that TSTC offers, and they eventually settled on Occupational Safety and Environmental Compliance.

Young was able to meet with the instructor, who showed him some of the projects and assignments they worked on. Young realized that his time in the oil fields had familiarized him with many of the elements contained in the program.

“Talking with the instructor and Buford, I realized what I had been doing in the military,” he said. “In the infantry, you are always your brother’s keeper. When we were talking about safety in the workplace, it clicked. Safety was always important to me in the military. There was great satisfaction for me in training my team to make sure they got home safe.”

Safety is where Young’s military experience and his education related to each other. He felt there would be a big satisfaction in helping those he worked with go home safe the same way he sent those he fought alongside home safe.

He started the program at TSTC in November 2021 and is set to graduate at the end of this spring semester.

“Doing this program has really opened my eyes to the rules and regulations of safety, to the various industry types, and has given me certifications I feel that most employers need,” Young said.

TSTC offers an Associate of Applied Science degree and an occupational skills achievement award in Occupational Safety and Environmental Compliance at the Abilene, Fort Bend County and Waco campuses.

According to onetonline.org, occupational health and safety technicians in Texas can earn a median salary of $39,460 a year and up to $78,580. The website projected that there would be a 22% increase in the number of such jobs in the state from 2020 to 2030.