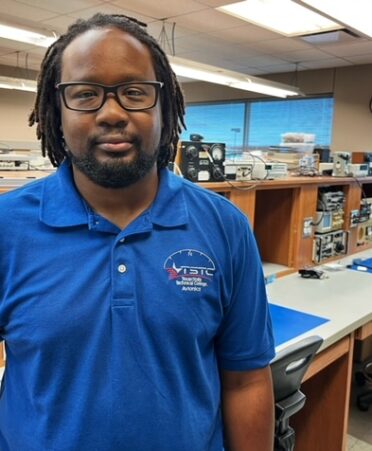 Arlington resident flies, drives to classes at TSTC in Waco

He can either drive on Interstate 35 or secure a seat on an American Airlines flight from Dallas-Fort Worth International Airport to Waco Regional Airport, then use ride-sharing to get to classes.

Nyagaka is an associate degree candidate for fall graduation in the Avionics Technology program at TSTC. He balances his class schedule with working in baggage claims at American Airlines.

He chose avionics because it combines aviation with his past work repairing cell phones, computers and laptops.

“I am just ready to go get out there,” he said. “Just from working at the airport for two years, and seeing the airplanes every time I go to work, it gets me excited.”

Ryan Becerra, a fourth-semester Avionics Technology student from Waco, said he has enjoyed working with Nyagaka during his time in the program.

“He’s really nice and helpful,” Becerra said. “We are test-set buddies, so we sit next to each other. We have a study group that we have formed.”

“Penn’s low-key demeanor is a great fit for aviation,” Segraves said. “He is able to leave his problems at the door and prominently displays his positive attitude as he works through his Avionics Technology projects. He truly will be an asset to his employer.”

Nyagaka’s motivation in life is easy to find.

“Mostly my family, just because I have family back in Kenya,” he said. “Just knowing eventually I can help them with money, building up land and equity, things of that nature. Just having a family of my own one day and supporting them.”

Nyagaka grew up in Arlington and developed a fascination with airplanes. After graduating from James Bowie High School in Arlington, he went to a two-year college in the Fort Worth area and began studying in a pre-med program with hopes of becoming an orthopedic surgeon. He later decided to pursue marketing but eventually changed his mind.

Nyagaka learned about TSTC from a relative, by way of a friend working in aviation maintenance. He was already familiar with Waco because a cousin is a Baylor University graduate.

“I liked the aerospace facility (at TSTC) and how big it was and that there was an airport,” he said.