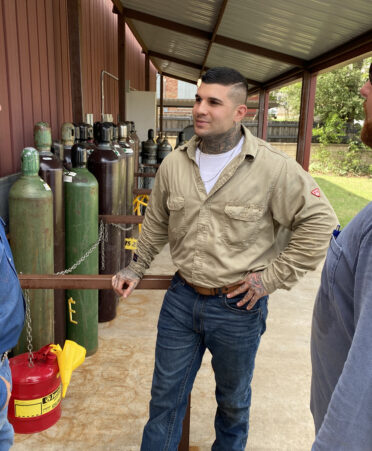 Byerly begins next chapter of his life at TSTC

(BRECKENRIDGE, Texas) – Steven Byerly was in a dark place when he made a life-changing decision.

While serving a prison sentence for driving while intoxicated, Byerly decided to rewrite his life story by going to college, earning a degree and starting a career. He spent time researching colleges that offered welding, and Texas State Technical College caught his attention.

After he was released from prison, Byerly contacted Stephen Hope, TSTC’s Welding Technology instructor in Breckenridge. After seeing the lab and talking to Hope, Byerly decided it was time for him to slow down and, as he likes to describe it, “not to rush my story.”

“I told myself while I was in prison that this was not the life for me,” he said. “I did not want what I learned before that to go to waste. I wanted to pick up where I left off and finish what I started.”

Byerly, originally from Orange County in southeast Texas, worked offshore in various roles, including as a welder’s assistant. While on the oil rigs in the Gulf of Mexico, Byerly found a passion for welding and was eager to learn.

Hope said Byerly’s dedication to bettering himself showed after one visit to the TSTC campust.

“When I found out that he took (to prison)his Bible and a CWI (certified welding instructor) handbook with him, I knew he was dedicated to becoming better,” Hope said. “I want to help him along that journey.”

Within those two days, Byerly, who is studying for an Associate of Applied Science degree, interviewed and was hired on a part-time basis at a Breckenridge manufacturing facility.

“It is a great place to start my welding career,” Byerly said. “I will be able to get some additional ‘hood time’ and learn different methods of welding in tight spaces.”

Byerly is appreciative of the help from Hope and fellow instructor A.J. Lewis.

“Their mission is to help build confidence in what we can do,” Byerly said. “If we make mistakes, they are going to be there to help. For someone like me, being able to still get out of that dark place and find confidence, TSTC is a good place for me.”

While in the lab on campus, Byerly has already talked to classmates about his past. He does not want anyone to work hard for a career, only to throw it away by making a bad decision.

“I told myself in prison that I need to take it one step at a time,” he said. “I can’t rush my story. I was young and inconsiderate of others. That was not right on my part.”

Hope said he sees Byerly making a difference in the lab.

“He is an open book. He does not want the younger students to make his mistakes,” he said. “Anytime he gets the chance, he will tell his story.”

Byerly’s main message for his classmates and anyone who hears his story is simple.

“Don’t rush your story,” he said. “I am on my journey to finishing my story. It means I have to start at the bottom and let the instructors teach me from day one to find my capabilities. That is why I decided to start over.”

According to onetonline.org, welders can earn a yearly median salary of more than $47,000 in Texas. These jobs are expected to increase 13% by 2028 in the state, according to the website.