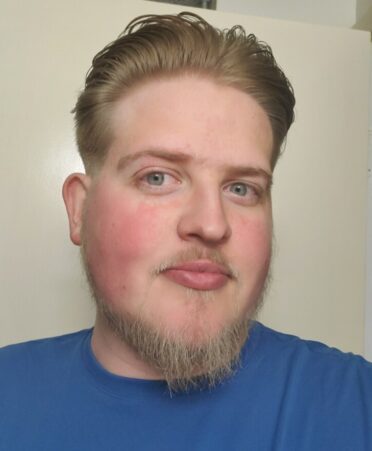 TSTC drafting grad’s dream job lands him among the stars

(HARLINGEN, Texas) – Texas State Technical College alumnus Gaddison GiuocoSchlaefer is a part of history, working as a drafter at SpaceX in Boca Chica.

While drafter is GiuocoSchlaefer’s official title, his actual tasks at SpaceX cover a wide range of responsibilities — and continue to grow.

“I am not only doing drafting, I’m designing a lot of stuff,” he said. “It’s so awesome seeing stuff you’ve designed actually being made. I’m part of the ground support equipment team. I work with the launch mount, so right now I’m designing catwalks that go up the entire outside of it so people can walk around the entire thing. It’s so cool.”

GiuocoSchlaefer first earned a pair of degrees in TSTC’s Aircraft Airframe Technology and Aircraft Powerplant Technology programs after he left the U.S. Army. Most recently, he earned a degree in the Drafting and Design program, graduating in 2020.

“The drafting program had a lot of amenities,” he said, adding that the course of study tied together all the things he was interested in. “It had a water-jet table, it had 3D printing and all that. It was a lot of fun.”

GiuocoSchlaefer moved to Virginia to be closer to his mother after graduation. He planned on finding a job there.

“Mr. Rosas contacted me, saying that someone from SpaceX contacted him and that I was on top of the list that he recommended,” GiuocoSchlaefer recalled. “I said, of course. It was my dream job to work at SpaceX, and then it just fell in my lap. I had two interviews, and then I was already on my way down here with the job.”

Rosas said SpaceX had contacted him, explaining that the team was reaching out to Rio Grande Valley colleges to see what — and who — they had to offer the company’s mission in Boca Chica.

“As I told Gaddison, he was the first that came to my mind,” Rosas said. “When he was a student, he was very into mechanical (drafting), which is what SpaceX was looking for. He went as far as buying his own 3D printer so he could continue processes at home and not have to be on campus to be playing with the things he designed and created.”

GiuocoSchlaefer’s additional degrees from TSTC also played to his advantage.

“It fit right up (SpaceX’s) alley,” Rosas said. “He had the experience with aerospace, he had the drafting, and he’s a very outside-of-the-box thinker and doesn’t allow himself to be confined by typical rules. He’s always trying to figure out new ways to do things, and he’s very dedicated to his work. He basically hit all of the check marks that they’re looking for.”

Mechanical drafters may earn an average annual salary of $57,500 in Texas, the U.S. Bureau of Labor Statistics finds, while architectural and civil drafters could make an average of $54,880.