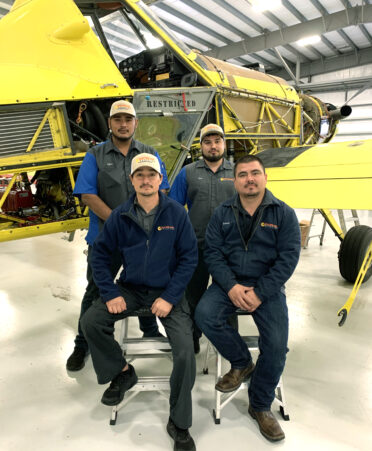 Texas State Technical College’s Harlingen campus has produced many aircraft technicians who are skilled at diagnosing and resolving a plane’s mechanical or electrical problems.

Those technicians include four TSTC alumni who have made a direct impact on the local aviation industry at Sun Valley Aviation Inc.

Sun Valley Aviation is a fixed-based operator in Harlingen that offers aeronautical services ranging from avionics, fueling, ground handling of aircraft, aircraft maintenance and much more.

Through word-of-mouth he heard that Sun Valley Aviation had opened an establishment in Harlingen. He applied and became its director of maintenance. One of his duties involves finding new prospects that need aircraft maintenance, and he also supports existing clientele.

In his eight years of employment, what he enjoys most is the company’s family culture.

“Mr. Kornegay, who is the company’s president, and his family live and breathe aviation,” he said. “That is one thing that brought me here.”

Edgar Rodriguez, of Sebastian, always enjoyed working hands-on with his own vehicle engines. He pursued TSTC’s aviation program with inspiration from his uncle, a welder who works with aircraft parts for General Electric.

He earned Associate of Applied Science degrees in Aircraft Airframe Technology and Aircraft Powerplant Technology in 2017. He has been an aircraft technician at Sun Valley Aviation for two years.

“One of my favorite projects was the replacement of an engine on a Beechcraft A36 Bonanza,” he said. “This is one of Sun Valley’s charter planes. At first it was difficult because of the engine installation. There was limited access to it. We got the plane fully suited. Then we adjusted the engine. It was great to have the engine run and fly for the first time. That moment stayed with me.”

Saul Pena, of Roma, grew an interest in aviation through a family friend who is a pilot.

“I used to work on minor mechanics with my father,” he said. “The pilot suggested that I try out becoming an aircraft mechanic. I worked in the oil field industry to save up money for TSTC’s aviation program. Then I enrolled.”

Pena earned Associate of Applied Science degrees in Aircraft Airframe Technology and Aircraft Powerplant Technology in 2018. His career as an aircraft technician at Sun Valley Aviation began two years ago.

Anthony Medrano, of Port Isabel, served as a sergeant in the U.S. Army. He pursued TSTC’s Aviation Maintenance program after a fellow Army veteran suggested it.

Medrano started his career as an aircraft technician at Sun Valley Aviation three years ago.

“A challenging project I worked on was with a Cessna 421 Bravo,” he said. “The project took two weeks to complete. The landing gear system on that aircraft is very complex. The goal was to get the landing gear properly rigged. It is a very important component of the aircraft. In the end, we were successful.”

“TSTC does a good job of giving willing and ambitious students a good basic foundation of knowledge on which to build their further qualifications and capabilities,” he said. “For an aviation professional such as an FAA-certified aircraft mechanic, the experience, a desire to continue their postgraduate education, and a work ethic are the essential ingredients for success. The people that have come to our company from TSTC have those qualities and are an essential part of our operations.”

Marv Esterly, director of aviation for Valley International Airport, added that TSTC in Harlingen provides workforce solutions that assist the community and airport in attracting companies to the area that deliver good-paying jobs.

“Having local businesses that employ our young career-seekers means they have opportunities right here in the Rio Grande Valley,” he said. “This guarantees a strong future for Harlingen and the surrounding area.”

The need for aircraft mechanics in Texas is forecast to grow 8% by 2028, according to onetonline.org. The average salary for a technician is $66,260, the website showed.

TSTC offers Associate of Applied Science degrees and certificates of completion in both Aircraft Airframe Technology and Aircraft Powerplant Technology at its Harlingen, Abilene, and Waco campuses.