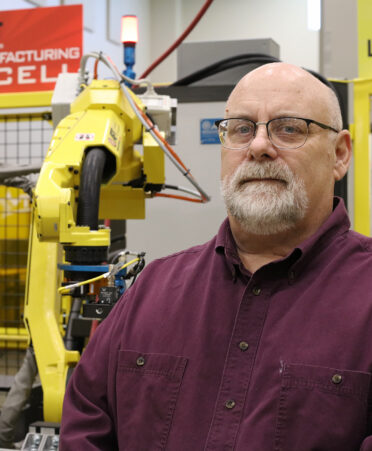 (ROSENBERG, Texas) – Texas State Technical College Robotics Technology instructor Charles Sparks has been interested in electronics since he was a teenager.

That interest took him through six years of active duty with the U.S. Navy where, as an electronic warfare technician, he was involved in detecting and analyzing incoming planes, ships, submarines and missiles.

After his service, Sparks obtained a degree in electronic engineering. From there, his career in the field took him everywhere from marine and ocean-bottom data acquisition systems to oil field supervisory control and data acquisition (SCADA) instrumentation.

“I’ve been doing electrical and electronic engineering all my life,” Sparks said, describing some of the equipment that he has had the opportunity to work with over the course of his career. Robotics, of course, is chief among them. “New technology I like. I’ve always enjoyed teaching as well.”

While Sparks’ generation is one that spent their formative years outdoors, fixing cars and bikes and getting in trouble for taking apart radios to tinker with, the current generation of students in TSTC’s Robotics Technology program is different. They grew up immersed in technology like that found in everything from smartphones to video games.

Sparks aims to impart mechanical experience along with foundational knowledge to his students.

“They gain the technical skills,” he said. “They build with their own two hands. They use what they built and apply it to technology.”

In the Robotics Technology lab on TSTC’s Fort Bend County campus, Sparks finds the most fulfillment in witnessing his students grasp concepts over the course of the five semesters they spend in the program.

Overall, Sparks hopes he can impart conceptual thinking to his students and that they learn from his extensive industry experience to approach their work in a logical and safe manner.

“It’s my goal to graduate junior-level design engineers — to give them all those tools, and then it’s up to them how far they want to go with them,” he said. “When the students graduate, they’re ready to go get employed. They’re ready 100%.”

TSTC offers an Associate of Applied Science degree in Robotics Technology at its Fort Bend County and Waco campuses. The program comes with TSTC’s Money-Back Guarantee. If participating graduates do not get hired in the field within six months of earning their degree, TSTC will refund their tuition.

Robotics technicians can earn an average annual salary of $52,010 in Texas, according to onetonline.org, which projects the number of positions to grow by 13% in the state through 2028. The Houston-The Woodlands-Sugar Land metropolitan area has the fourth-highest employment level of robotics technicians in the nation, according to the U.S. Bureau of Labor Statistics.