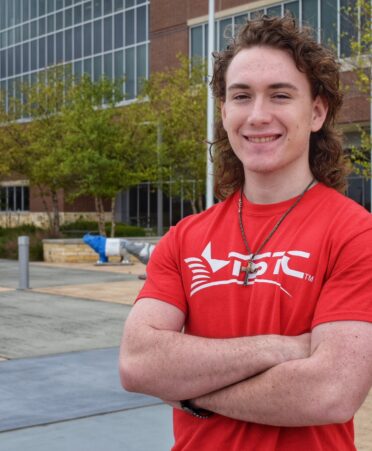 (HUTTO, Texas) – Richie Cooper, of Hutto, realized early on that he could use his hands and mind to be the technically skilled worker that a company wants.

Cooper recently started his second semester at Texas State Technical College in East Williamson County in the Industrial Systems – Mechanical Specialization program, where he is working toward an Associate of Applied Science degree. He is scheduled to graduate in 2023.

“Richie is a good student, and he is always willing to help others,” said Lance Antilley, an instructor in TSTC’s Industrial Systems program. “He is thoroughly engaged in the lab and seems to enjoy the hands-on practical experience and assessments.”

“Richie has been an interested and engaged student since high school and has shown his hard work and dedication toward working to pay for school,” said Lissa Adams, provost of TSTC’s East Williamson County campus. “He took the initiative to visit with campus leadership and instructors, tour the campus programs and recruit his peers. Richie is deserving of the provost’s scholarship and we feel very fortunate for the opportunity to support his success and remove financial barriers.”

Cooper is working as he takes classes at TSTC. He works at AEND Industries Inc., a custom polyurethane wheel manufacturing company in Hutto where he washes and dries freshly made injection-molded wheels.

Cooper said he has been trying  to encourage his friends to go to TSTC.

“There are a lot of opportunities,” he said. “It’s an easier way to get to what you are trying to get into. You can have really good hands-on experiences with what you want to learn.”

Cooper said Michael Smith, vice president of development for The TSTC Foundation, is a family friend who encouraged him to attend the college.

“From an early age Richie showed a desire to carve his own path and break from the herd, and it didn’t shock me at all when he reached out about learning more at TSTC,” Smith said. “He organically became our unofficial spokesman, advocating to his peers at Hutto High School and within the community at large.”

Cooper said going to TSTC meant a guaranteed job in his profession and the knowledge that there will always be a need for his skills. He said TSTC’s cost was also factored into his decision.

Cooper’s future plan is to get an internship at ICU Medical in Austin, which has a partnership with TSTC’s Industrial Systems program at the East Williamson County campus. He said he wants to work at the company after graduation.

“I think it is super cool (that) you can actually get into a job through TSTC and get on the right track,” he said.

TSTC’s Industrial Systems program is part of the Money-Back Guarantee. Students in their first semester are eligible to sign up for free with campus Career Services representatives. Students are able to take part in workshops to learn about resume writing, interview techniques and other employment skills. Students who are not hired in their field within six months after graduation may be eligible to get a tuition refund for their time at TSTC.