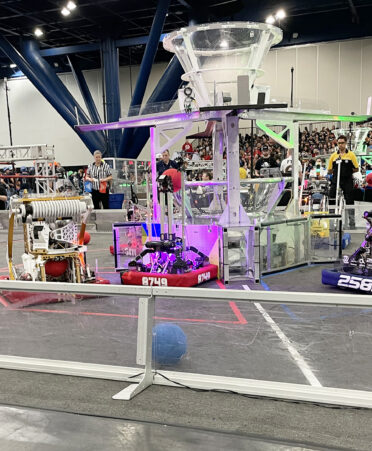 (ROSENBERG, Texas) – Texas State Technical College instructor Joshua Schott recently leapt at the chance to help judge the statewide FIRST Robotics Competition held in Houston and received a firsthand look at the kind of knowledge and technology that high schoolers have at their fingertips.

“Listening to these high school students spout back the exact same stuff that they know because they’re building a robot from nothing to a finished product and programming it at the same time was awesome,” Schott said. “Some of them were sophomores actually writing in JavaScript and C++. I was like, ‘Are you kidding me?’”

Something like this would have been right up Schott’s alley when he was that age, he said, describing the hustle and bustle of the competition and demands on the participants.

Schott is a graduate of TSTC’s Robotics Technology program who now teaches electrical core classes while also filling in as needed for courses in the Electrical Power and Controls program.

Dozens of robotics teams from the region converged on Houston for the event. Some team members manufactured their own chassis and parts for their robots, using 3D printers or computer numerical control (CNC) machines.

Schott also appreciated the business aspect of the competition, which included management and funding experience.

“It gives them a heads-up in college to actually know what they want to do,” he said.

Members of TSTC’s student recruitment team were also on hand to give away $12,000 scholarships to two lucky participants.

The competition offered more than a chance to see who built the best bot. It also represented an opportunity to define futures.

“Colleges are scouting for potential students,” Schott said. “To actually see the excitement on their faces when their robot performs how they’re supposed to, they understand that it’s not just a game to play in high school — it can be the rest of their lives. It can take them somewhere.”

Schott pointed out that NASA sponsored a portion of the teams.

“It could take them to Mars if they know what they’re doing,” he said.

TSTC offers an Associate of Applied Science degree in Robotics Technology at its Fort Bend County and Waco campuses. The program is part of the college’s Money-Back Guarantee. If participating graduates are not hired in the field within six months of earning their degree, TSTC will refund their tuition.

In Texas, robotics technicians can earn an average annual salary of $61,250, according to onetonline.org, which forecasts such positions to grow in the state by 13% through 2028.