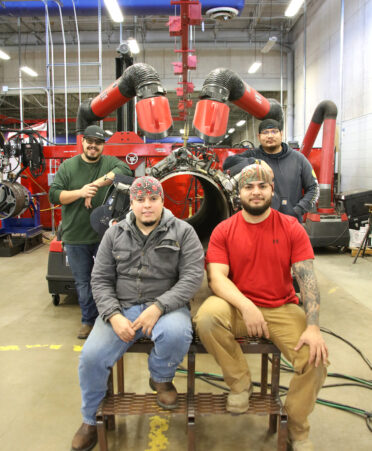 (HARLINGEN, Texas) – The game of chess is known to require the utmost patience, preparation and strategy. Those same principles are comparable to the welding industry.

Four TSTC alumni have established the direction of their program into a cohesive Welding Technology program at Texas State Technical College’s Harlingen campus.

Manuel Ahumada, Isaac Rivas, Raul Saldivar and Samuel Williams are molding their students with the knowledge and intriguing techniques for success.

Ahumada, of Raymondville, grew an interest in welding at a young age. He accompanied his father and grandfather on a farm where they worked. He observed the basic welding techniques his father performed on small barbecue pits.

The former Marine became an assistant lead instructor for TSTC’s Welding Technology program in October 2020. As the program evolved, he transitioned to a program lead in January 2021.

“My goal was to continue to push the automation program forward,” he said. “I wanted to keep the basics since new students were enrolling in the program with no experience. Once they learn the various processes and techniques, they will be able to control automation to do the welding. This is what companies are steering toward now.”

Saldivar, of San Benito, was surrounded by family and relatives who worked on fabrication projects in several shops. The welding aspect caught his interest at a young age. He immediately knew that TSTC’s program would be his career direction.

He earned a Combination Welding certificate in 2012. A year later, he earned an Associate of Applied Science degree in Welding Technology.

Saldivar joined TSTC as an instructor in May 2020. He was excited to teach the basic methods of welding, as well as advanced pipe welding and automation machines.

Samuel Williams, of Primera, pursued nursing when he was in high school. He graduated from Harlingen High School as a certified nursing assistant. Although he continued that medical path at TSTC, he was not fulfilled.

“A friend of mine who used to work for TSTC suggested I attempt welding,” he said. “When I pursued the medical field, I was told that I was always careful how I approached my work. I decided to apply those principles to welding. I researched the career salary potential, and the rest is history.”

He earned an Associate of Applied Science degree in Welding Technology in 2016. Then he earned an enhanced certification in Orbital Welding and Pipe Specialization in 2017.

Williams joined TSTC as an instructor in June 2020. What excites him about the program is the continued growth.

“Everyone has been able to adapt to constant change,” he said. “We are excited to educate the students with new challenges. When companies visit our program to speak with the students about the potential career outlook, it is great to notice the engagement taking place.”

Rivas, of San Perlita, first caught a glimpse of TSTC’s welding program when he attended as a dual enrollment student. After his high school graduation, he relocated but returned a few years later. A close friend was enrolled in TSTC’s welding program, and Rivas received a tour of the facility.

After he enrolled in the program, he was granted an opportunity to become a lab assistant due to his prior experience. That enhanced his expertise further as a student.

Rivas earned an Associate of Applied Science degree in Welding Technology in 2015. Later he earned an enhanced certification in Orbital Welding and Pipe Specialization.

The expertise he gained as a lab assistant, as well as his TSTC degrees, led to Rivas being hired as a TSTC instructor in February 2016. What he enjoys about the program is the diversity and knowledge that each instructor implements.

“Gas tungsten arc welding, also known as TIG welding, is what I am teaching,” he said. “You multitask throughout the entire process. You have to simultaneously use everything. You have your personal protective equipment. It is one of those processes that only a few can understand because it takes great skill.”

According to onetonline.org, welders can earn a yearly median salary of more than $45,000 in Texas. These jobs are expected to increase 13% by 2028 in the state, according to the website.