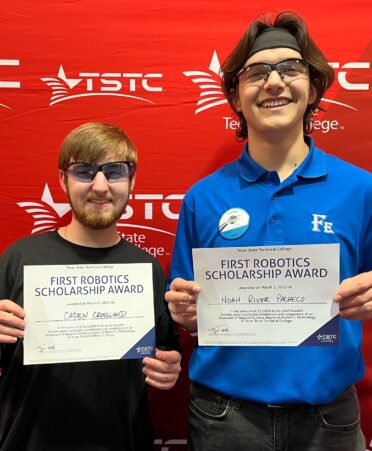 “TSTC is the premier provider of technical training for Texas, with 10 campuses across the state,” said Brian Reeves, an instructor in TSTC’s Robotics Technology program and an associate provost at the Waco campus. “We believe everyone deserves a great career in robotics or a related field.”

The competition, which took place March 3-5, featured 40 student teams from as far away as Mission and Pharr in the Rio Grande Valley to Alamogordo, New Mexico. Teams put their robots to the test in ball-tossing and bar-climbing contests.

Graduating high school seniors were encouraged to visit TSTC’s recruitment table to include their name in a drawing for two $12,000 scholarships. The tuition scholarships can only be used for TSTC’s Robotics Technology program in Waco.

Crossland said he was thrilled to receive the scholarship. He has been involved in robotics since he was in middle school. He said he enjoys making connections with other people through robotics and accomplishing something that he said is bigger than himself.

Pacheco said it felt great receiving the scholarship. He has participated in robotics throughout high school. He said it was great for the team to bond throughout the year and stay late after school to work through robotics issues.

“Robotics is really good for problem-solving and thinking through things,” Pacheco said. “I have grown as a person (throughout high school) and was nominated as team captain and driver.”

For more information on the FIRST Robotics Competition, go to firstinspires.org.