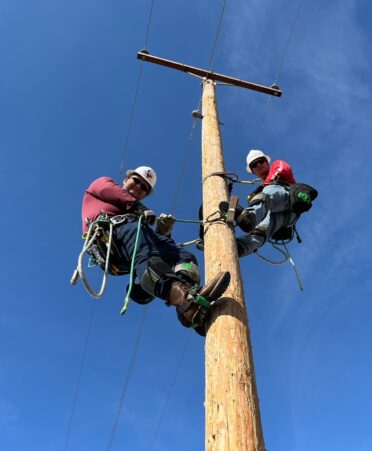 Casey Brewer, of Belton, and James Morales, of Plano, both credit their relatives’ support for the work they are putting into earning Associate of Applied Science degrees in Electrical Lineworker Technology. Brewer is scheduled to graduate in the spring and Morales in the summer.

Brewer became interested in the lineworker field when he learned about electric power transmission work from a friend of his mother.

“I love being outdoors working and not being indoors in an office all day,” he said. “That is what got me interested in it.”

Morales said his grandmother encouraged him to go to TSTC, and after watching videos on social media, he was ready to learn.

“Going here (to TSTC) has helped me get out of my shell,” he said. “I feel more confident after graduating from high school. I will be the first in my family in 40 years to receive a college degree.”

Morales started his first semester in the program in January 2021, enabling him to adjust quickly to working in the cold. He also learned to conquer a fear of heights.

“I have had nothing but a blast this whole time at TSTC,” he said.

Brewer said his first semester in the program was a challenge, especially in the Texas heat.

“It was scary because we did ups and downs every day on the poles,” he said. “It was to work your body to get used to the height.”

Brewer has been able to get paid experience while he has been at TSTC. He has worked several times as a contract worker during bad-weather situations.

“You are out there and sent to poles that are knocked down,” he said. “You sit there and watch the poles and put caution tape up. You are there for about 12 to 16 hours.”

Brewer is currently considering job options and wants to live and work somewhere between Georgetown and New Braunfels so he can be within driving distance to visit his family.

“I’m very excited to graduate and work in the real world,” he said. “TSTC does mean a whole lot to me.”

Brewer wants to do transmission work and eventually become a manager.

Morales said his career goals include having a steady job and helping his family.

“I want to stay in one place and get established, but in a few years, I want to travel for work,” he said.

“I think every single one of these guys will get a job,” Burke said about this semester’s graduating students.

Brewer, who said he has lost weight while in the program, said regularly exercising before starting the program will be helpful.

According to the U.S. Department of Labor’s CareerOneStop website, electrical power-line installers and repairers in Texas make a yearly median salary of more than $55,000. The agency predicts that more than 13,000 workers will be needed in the state by 2028.

“It (electrical line work) is always in demand,” Morales said. “As long as you can come here and put in the good work, the better.”

TSTC’s Electrical Lineworker Technology program is part of the Money-Back Guarantee. Students in their first semester are eligible to sign up for free with campus Career Services representatives. Students are able to take part in workshops to learn about resume writing, interview techniques and other employment skills. Students who are not hired in their field within six months after graduation may be eligible to get a tuition refund for their time at TSTC.