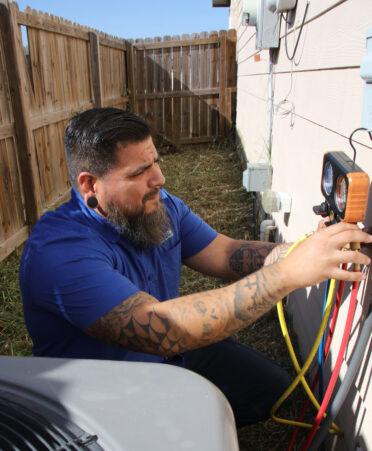 (HARLINGEN, Texas) – The bond between a father and son is a connection that can transform a child’s ability to learn life lessons.

Texas State Technical College HVAC Technology alumnus Marco Silva treasures the relationship he has with his father because it led him to a valuable trade and the possibility of becoming an independent contractor.

“My father did well as an automotive mechanic during my childhood,” Silva said. “Thanks to his guidance, I became mechanically inclined. It made me realize that I could establish a business venture, but I didn’t want to lose that joy for my hobby. I performed an online search, and I discovered the HVAC Technology program on TSTC’s website. I found it as an opportunity to apply my trade skills to a potential career.”

The Harlingen resident earned an Associate of Applied Science degree in HVAC Technology from TSTC in 2018.

Prior to graduating from TSTC, Silva learned key information from HVAC program director Jorge Cabrera that became his driving force.

“Mr. Cabrera informed our class that an HVAC technician can test to become a licensed independent contractor after gaining five years of field experience,” he said. “He elaborated and said that a technician can test to become an independent contractor in three years by earning an Associate of Applied Science degree in the program. When I learned that, it became my goal.”

Silva proved his skills in the next chapter of his life. He accepted a job as a full-time helper with Southern A/C and Heating Solutions in Harlingen in 2018. He was promoted to an HVAC technician after eight months.

Another job opportunity arose with Suncoast A/C and Refrigeration in 2019.

“I took on duties as an HVAC technician in residential and commercial maintenance, and repaired air conditioning units,” he said.

“My duty is to provide maintenance and repair air conditioning units in residential areas,” he said.

“Marco provides solutions when there is not a specific guideline or policy in place,” he said. “He is a strong revenue producer for the company.”

Silva said that the work culture at each company has been encouraging.

“At Southern A/C and Heating Solutions, the employees were welcoming and helped me learn more,” he said. “At Suncoast A/C and Refrigeration, I enjoyed learning commercial equipment because it’s different compared to residential gear. Sears has been motivating because I have appreciated the independence of handling a variety of duties.”

He added that his job experience has been worthwhile.

“There have been multiple occasions when a client’s air conditioning unit has stopped working on a hot day,” he said. “Nobody wants to be in that situation. I feel honored to solve their problem with my service.”

“The month of February will mark five years of work experience,” he said. “I will test in order to become a licensed independent contractor. My initial goal was to test in three years, but I decided to wait because of the pandemic.”

Billy Weaver, a TSTC HVAC instructor, said that as a student Silva knew the importance of organization.

“Marco took the initiative to work on projects to meet a deadline,” he said. “His approach in the program has contributed to his success in the industry.”

In Texas, heating, air conditioning and refrigeration mechanics and installers can earn an average annual salary of $47,980, according to onetonline.org, which forecast the number of such positions in the state to grow by 21% from 2020 to 2030.