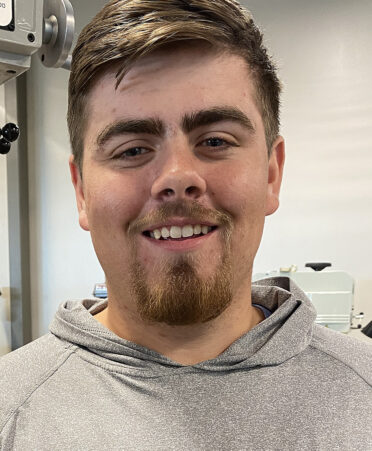 To help him prepare for the future, Denson is working on a certificate of completion in Industrial Systems at Texas State Technical College.

His father owns two businesses in the Abilene area, and Denson wants to be his successor.

“I plan to own those businesses one day, and I do not know everything I need to know about them,” he said. “I have worked for him for the past six years, and I know he cannot teach me everything.”

For that reason, Denson enrolled at TSTC to learn a little of everything in the maintenance field. Industrial Systems students learn skills needed to repair and maintain hydraulic systems, pneumatic equipment, conveyor systems, and electrical and mechanical controls, as well as learning welding.

“I know I will need to work on my troubleshooting skills in order to be successful,” Denson said.

His father’s two businesses include a tree service company, which clears areas for power and transmission lines, and a wind turbine recycling business.

Instructor Terry Steelman said Denson is motivated to take over his father’s businesses.

“I see his drive each time he is in class, and I know he will be successful,” Steelman said. “He has learned a lot from his father, and I know this program will help him grow.”

Denson has been able to show his new skills to co-workers, and they have been impressed.

“We were working on a tractor one day, and someone said we needed to rethread a helix coil,” he said. “That was one of our assignments a few days earlier, and I told everyone I could do it. They were impressed with what I was able to do because of what I learned in class.”

Denson has also used the skills he has learned on the job while in the lab. He has been able to help classmates with different scenarios and has built many friendships.

“When I saw some of my classmates attend, I knew I wanted to go,” Denson said. “We have become really good friends, and it is important to have that close environment so we can all succeed.”

“I also knew some of the graduates of the program. They told me they loved the program and were already working,” he said.

The one area of his father’s businesses that he does not have to worry about is the business side.

“My father is teaching me everything about the business aspect,” he said. “I know a lot of the stuff in the shop and have already been OSHA (Occupational Safety and Health Administration) certified.”

Denson said his father did offer him one piece of advice before he started college.

“He told me to do the best I can possibly do,” he said. “I know that I will be using everything I learn in the real world, and I want to learn all of this.”

Industrial Systems is one of nine programs at TSTC that have money-back guarantees. The college’s commitment to students is simple: If they do not have a job in their field within six months of graduation, they will receive a full refund of their tuition. For more information on the money-back guarantee program, visit https://www.tstc.edu/admissions/tuition/.