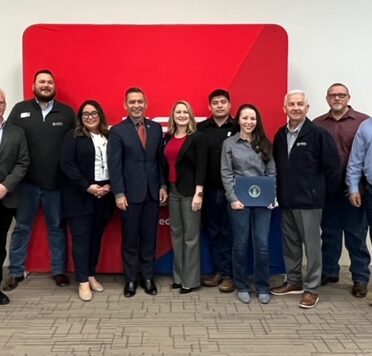 Representatives of R&D Molders Inc. and TASUS Corp., both located in Georgetown, and Saleen Performance Parts, located in Round Rock, signed agreements with the U.S. Department of Labor committing to host apprentices that will take online TSTC classes and earn valuable paid work experience at the companies. The program lasts up to 18 months.

“This apprenticeship program allows the apprentices to earn while they learn and develop a progressive career with each employer,” said Lissa Adams, provost of TSTC’s East Williamson County campus. “This partnership with the consortium of companies maximizes the opportunity to place more Texans in high-paying jobs.”

Angie Reyes, human resources and safety manager at R&D Molders, said the apprenticeship program will show people job opportunities that they might not have known about.

“Once they have a starting point, they have a career and more motivation,” she said. “We are talking about the next generation bringing manufacturing back to the United States.”

Tom Lynett, vice president of manufacturing at TASUS Corp., said the apprenticeship program aligns with the company’s belief that employees are the most important part of a business.

“We have a vision to make TASUS better than we found it,” Lynett said.

Daniel Webster, vice president of Saleen Performance Parts, said employees learn fast and pick up skills as they use the latest technology to produce street and track high-performance vehicles. The company also prides itself on keeping its production on American soil.

“We need people excited about the process and chemistry that goes into it,” Webster said.

Texas Workforce Commissioner Representing Labor Julian Alvarez III said Gov. Greg Abbott gave his agency a task in 2016 to work more with industries and educational entities to provide tools for people to succeed. He said an ongoing goal is to make the trades more attractive to young people.

“We are training for careers right now that we did not have five years ago,” Alvarez said.

The partnership is through Workforce Solutions Rural Capital Area in Cedar Park.