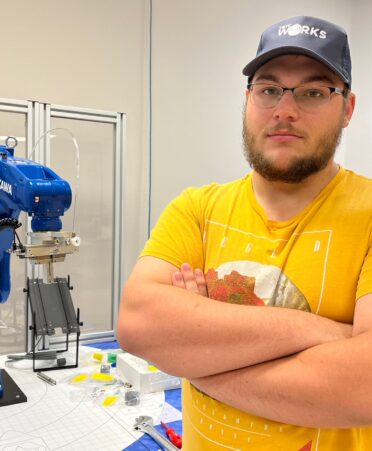 Since then, Walker has not looked back in meeting academic obstacles. Today, he is an Automation and Controls Technology student at Texas State Technical College in Marshall scheduled to graduate in spring 2023.

Walker will soon encounter a new challenge, this time on the national level. He will represent TSTC and the state of Texas at the 58th annual SkillsUSA National Leadership and Skills Conference being held June 20-24 in Atlanta, Georgia. Walker will compete in the Industrial Motor Control contest.

“We are proud of James,” said Barton Day, provost of TSTC in Marshall. “While we will be rooting for all of the statewide TSTC contingent, we will also root for our East Texas contestant and wish him the best.”

SkillsUSA is a professional organization teaching employability, leadership and technical skills that can help middle school, high school and college students pursue successful careers and be part of a skilled workforce. SkillsUSA has more than 100 competitive events, ranging from 3D Visualization and Animation to Welding Sculpture.

Walker is doing extra preparation for his upcoming contest by studying the NFPA 70 National Electrical Code and facts about SkillsUSA.

Douglas Clark, an instructor in TSTC’s Automation and Controls Technology program, said he will be putting Walker through practice tests ahead of the national contest.

Walker qualified for the national conference by placing first in the Industrial Motor Control contest at the SkillsUSA Texas Postsecondary Leadership and Skills Conference held in April in Houston. He said the state contest was difficult because he had not learned some of the material covered in the contest.

Walker has put his mathematics skills to good use in the Automation and Controls Technology program, including in the first-semester Electronics Fundamentals in Automation class, where he learned about Ohm’s law.

After graduation, Walker said he wants to work at Samsung Austin Semiconductor.

Clark is looking at new SkillsUSA categories in which his students can compete next year.