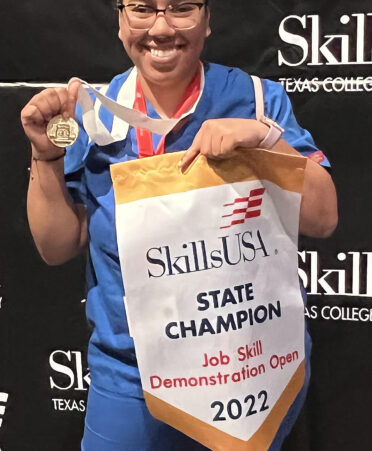 Now Henry, of Abilene, is glad she did because she will be one of 18 TSTC students who will compete in the SkillsUSA National Leadership and Skills Conference in Atlanta, Georgia, in June.

“I emailed (TSTC Nursing instructor Marchelle) Taylor at the last minute that I would compete,” she said of the state competition. “I kept going back and forth about competing, but I am glad I did.”

Henry won the job skill demonstration open event, in which she had to show judges the proper way to inject insulin. Having a delay to the start of the event did not deter Henry, according to TSTC Vocational Nursing instructor Joan Coldiron.

“We had a little stress over that, but Seaanna kept her cool outwardly,” Coldiron said. “She had practiced and was ready because the subject was something of importance to her. She did a good job. I expect the same at nationals.”

Henry said the competition was an excellent learning experience.

“It was cool to be able to compete and represent TSTC,” she said. “I decided to compete in order to get out of my comfort zone.”

One specific area that Henry had to adjust to was talking in front of others.

“I loved it,” she said. “I knew that would be one of the hardest aspects of the competition.”

With nationals in sight, Henry is ready to compete and enjoy a different experience.

Coldiron said Henry will take the same approach in Atlanta as she did in Houston last month. But both are hoping there is not a delay to begin the event.

“She and I reported to her assigned area and visited until she was finally able to compete,” Coldiron said. “I think it was at least 30 minutes later than expected.”

Henry appreciated that time with Coldiron.

“Joan calmed me down because I was so nervous,” she said. “She was wonderful, and she was just as excited that I won.”

Both Henry and Coldiron are looking forward to the national event and what it has to offer.

“We enjoyed seeing the new technology that is out there now, even though it isn’t our field of study,” Coldiron said. “SkillsUSA is an amazing opportunity for the students.”