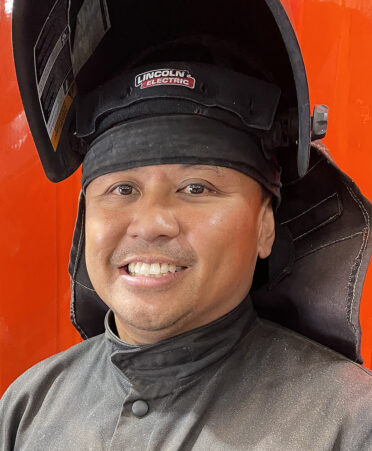 (BROWNWOOD, Texas) – Rodger Ruiz wants to show people that they are never too old to learn a new skill.

When Bangs High School students toured TSTC’s Welding Technology lab in Brownwood earlier this month, Ruiz talked to them about his military career and what he is doing today.

“I wanted to let those students know that it is never too late to do something new,” he said. “I said, ‘Look at me – I am 50.’ Then I said to the students that you can learn new tricks no matter your age.”

Ruiz also had another message for the high school students and his TSTC classmates.

“I have told people to get their certification in welding done first because you will always have time to work on your advanced education,” he said. “It is good to learn a skill and have that to fall back on if you need it.”

Ruiz is studying for a certificate of completion at TSTC to help his father-in-law on the family ranch. Welding is not one of the skills he picked up during his time in the U.S. Army. He was an air defense officer and worked on the military’s Patriot and Stinger missiles.

“I initially joined the National Guard when I was 17, and a couple of years later I went to college and joined the ROTC,” he said. “I received my commission and was immediately in the Army.”

When Ruiz gets the chance, he talks about his military service, and TSTC welding instructor Daniel Aguirre is always willing to listen.

“Rodger has so many great stories and is an inspiration to others,” Aguirre said. “I enjoy it when he comes to class because he always has a positive attitude and is willing to learn.”

Ruiz said he wishes he would have learned different welding skills earlier in life but is grateful for the chance now.

“This is a tremendous skill to have,” he said. “I am learning different things that will help me around the ranch and look forward to trying different techniques.”

He will put that skill to use on his father-in-law’s ranch. When his wife wanted to be closer to her family in Brownwood, Ruiz agreed to move.

“I asked my father-in-law if we could get a couple of acres on his ranch to build a house, and he agreed,” he said. “I found out some welding needed to be done around the ranch, and it was nearly impossible to get someone.”

That is when Ruiz decided to look into learning a new skill. After doing some research and knowing he had some GI Bill funds available, he enrolled in TSTC’s Welding Technology program.

Ruiz said Aguirre has accommodated him during his first semester in the program. Juggling work and school led to some extra time in the lab.

“He is dedicated to getting his work done and will do anything it takes to make sure he is successful,” Aguirre said.

After his first semester, Ruiz says welding could become a second job for him.

“I could consider a second job in welding along with the work I do on the ranch,” he said. “I know there will be enough to keep me busy. It will be nice to know another skill and not have to rely on other people to get the work done.”

According to onetonline.org, welders can earn a yearly median salary of more than $45,000 in Texas. These jobs are expected to increase 13% by 2028 in the state, according to the website.