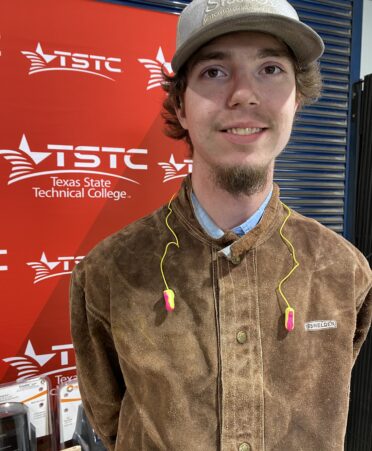 Cowart said before he started the certificate of completion program last August, he had bad habits when it came to welding. He has been losing those habits while improving his skills before entering the workforce.

“My goal when I started the program was to get rid of all the bad habits I had when I was welding,” he said. “One of those habits was that I was making too many big movements when I was welding. That was the first bad habit I needed to break.”

With the help of instructor Daniel Aguirre, Cowart has seen himself improve.

“I look at some things I did in the first weeks of class compared to today. It is like night and day,” Cowart said. “I keep telling myself to make smaller movements so the work will look better.”

Aguirre has also seen Cowart’s improvement since his first project.

“Trenton came in with some welding experience, but he did have a lot of bad habits,” Aguirre said. “He has worked on fixing those habits and has become a better welder. He aspires to learn so much while he is in class because he wants to be the best he can.”

Cowart, of Coleman, said in his previous experience he did not give much thought to how his finished welds looked.

“Now I know what I am supposed to look for when I weld two pieces of metal together,” he said. “It is a good feeling, knowing the work is done correctly.”

Cowart did not expect to enjoy the welding program as much as he has. He credits that to his classmates.

“We all come in early to get started together,” he said. “When we started together, it was quiet, but over time we knew what was expected to get done and worked with each other. Now I consider all of us in class one big family.”

Aguirre said Cowart has opened up more in the lab.

“He is one of my most upbeat students,” he said. “He comes to class ready to learn and always puts a positive spin on everything, even if he did mess up part of his project. That is a good trait to have as a welder.”

Cowart does not have specific job plans after graduation, but he hopes to get on with a company in the Brownwood area.

“I like to work with my hands and did some construction before,” he said. “I talked to welders on the job sites, and they told me the kind of money I can make. I decided then that I wanted to become a welder.”

According to onetonline.org, welders can earn a yearly median salary of more than $47,000 in Texas. These jobs are expected to increase 13% by 2028 in the state, according to the website.