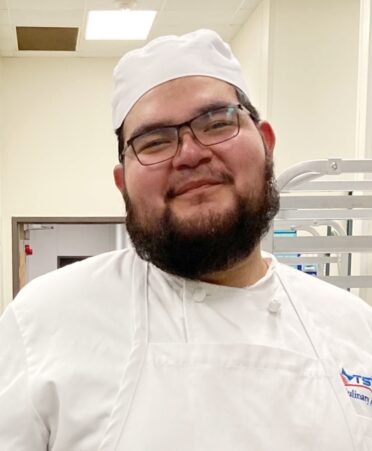 (HUTTO, Texas) – Ramiro Aguilera, of Del Valle, eventually wants to take his cooking outside for everyone to enjoy.

Aguilera is a certificate of completion candidate for December graduation in the Culinary Arts program at Texas State Technical College in East Williamson County.

He has enjoyed learning how to cook different recipes while at TSTC.

“I was never really into baking, but when they (the instructors) taught me the steps, it got me a bit more interested in it,” Aguilera said. “It was complicated at first because there are different methods, but it was really fun to bake.”

“During his time at TSTC, he has showcased his artistic and creative genius in plate designs,” Adams said. “His confidence in the kitchen is equally matched by his confidence in himself.”

Aguilera balances classes with working part time as a prep cook at Hyatt Regency Lost Pines Resort and Spa outside Austin. After graduation, he will become a full-time employee there.

“So far, they (the hotel kitchen staff) have taught me what it means to work in a tightly spaced environment,” Aguilera said.

Aguilera, a graduate of Cedar Creek High School, became interested in cooking when he was in high school. One of his favorite dishes to cook is picadillo, a Mexican beef and potato stew, based on a recipe from his mother.

His goal after graduation is to open a food truck, but first he wants to get more experience at the hotel before venturing out to do other things in the culinary field.

Aguilera said his advice for high school students interested in pursuing culinary arts is not to be afraid to ask questions.