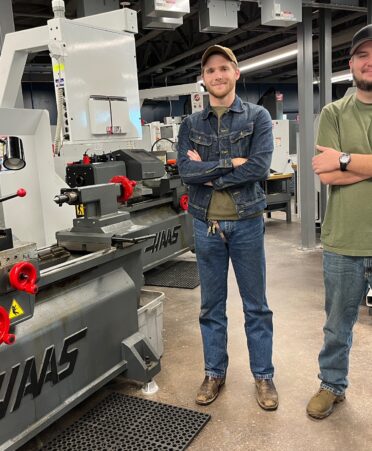 (WACO, Texas) – Four fall candidates for graduation in the Precision Machining Technology program at Texas State Technical College’s Waco campus have been hired by a Texas-based producer of machined products and assemblies for the aerospace and defense industries.

Universal Machining Industries Inc., in Muenster in Cooke County, has hired Calvin Golden, of Temple, Dylan Jones, of Ennis, Jace Koudelka, of Haslet, and Blu Qualls, of Sherman, to begin work as machine operators in mid-December.

The company’s owner and general manager, Steve Trubenbach, is a graduate of the Mechanical Engineering Technology program at Texas State Technical Institute, now known as TSTC.

“We have been successful in hiring new employees that are coming out of the Precision Machining Technology program there in Waco,” Trubenbach said. “While going through the program, these students are being exposed to the fundamentals that they will need to know every day that they work in my facility. Anything from the use of general inspection tools to CNC machine setup and operation, they learn in the program.”

Jeremy Bailey, lead instructor in TSTC’s Precision Machining Technology program at the Waco campus, said Trubenbach knows the quality of future employees he is getting by hiring TSTC students. Bailey said students who have gone on to work at the company in the past have had a good combination of soft skills and work ethic.

The students are scheduled to graduate from TSTC’s Fall 2022 Commencement at 6:30 p.m. on Wednesday, Dec. 14, at The BASE at Extraco Events Center in Waco.

“I have been looking forward to it (graduation) for a while,” Qualls said. “It will be gratifying to have a diploma.”

Qualls said he is glad to have a job already lined up before graduation.

“It’s a weight off the shoulders to not have to worry about that anymore,” he said.

“It makes the first couple of semesters easier,” he said. “This is a trade where you are not sitting behind a desk. You get to solve problems on the shop floor rather than behind a desk.”

Golden said he is counting down the days until he walks across the stage to receive his diploma.

Golden worked in military police for four years in the U.S. Army, with some time spent in Germany. When he left the military, he wanted to find a vocational career that fit with his GI benefits. He had never been in a machine shop before coming to TSTC.

“I feel like I picked up on it,” Golden said. “There is a fear of pushing the green button on the CNC machines. You have to pray the math is right.”