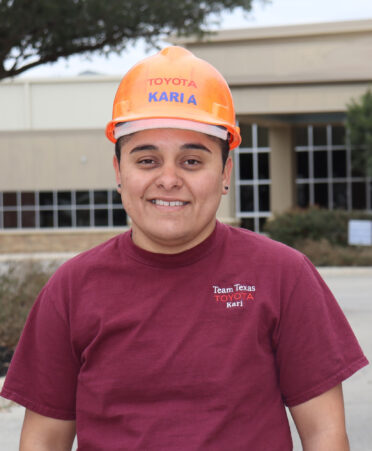 TSTC alumna’s passion for manufacturing leads her to Toyota

(HARLINGEN, Texas) – Texas State Technical College alumna Kari Alonso, of Brownsville, recalled her childhood memories of observing her father work on auto body repair projects outside their home. Little did she realize that would steer her toward a prosperous career in manufacturing.

She grew a keen interest in the medical field after graduating from high school. Later she enrolled in TSTC’s Surgical Technology program, but she quickly realized that she was not fulfilled and withdrew from the program.

“It was a tough decision to make,” she said. “I worked hard to get into the program and had excellent grades.”

The following semester that childhood memory with her father initiated an interest in TSTC’s Auto Collision and Management Technology program, in which she earned an Associate of Applied Science degree in 2012.

Although she gained employment in the auto body industry for a brief period, she felt there was more that she could accomplish.

“I remember feeling this job is not for me,” she said. “There is more for me to achieve. I attended a career day event at TSTC. I met Isaac Gonzalez, who is an instructor in the Precision Machining Technology program. He provided a tour of the facility, and I felt it was a great fit. It is very interesting to notice how a project starts from scratch. Then it turns into something meaningful to use.”

Alonso earned a certificate of completion in Precision Manufacturing Technology in 2014. Then she earned an Associate of Applied Science degree in the same program the following year.

With a new career outlook, she learned that several San Antonio-based manufacturing companies were hiring. Her intent was to work for Toyota Motor Corp., but the company did not have vacancies at the time.

Then a manufacturing opportunity with Delta Centrifugal arose.

“I drove to Temple to tour the Delta Centrifugal facility,” she said. “I really enjoyed my visit. They are a great company to work for and are very family-oriented. I was employed there for seven months. Then Isaac Gonzalez contacted me about a new job opportunity at Toyota.”

Six months later she was hired as a skills maintenance team member in the press, tool and die department at Toyota.

“My role consisted of performing preventative maintenance on the dies, testing and repairing hydraulic systems, and other duties,” she said.

Her duties have since evolved.

“Now I work hands-on with SNK and Haas computer numerical control milling machines,” she said. “I make spare parts for these dies. I handle any major repairs on them as well. If a major breakdown happens, I am involved in welding and re-machining the process that was damaged.”

The impact that Alonso brings to her role reflects her perseverance.

“It is gratifying to see the end result of a project you worked hard on,” she said.

In Texas, CNC tool programmers can earn $57,670 per year, according to the U.S. Bureau of Labor Statistics. The projected growth for this job in the state is 29% through 2028, onetonline.org finds.

TSTC is so confident that the training its students receive during this program will culminate in a job that Precision Machining Technology is part of the college’s Money-Back Guarantee. If graduates do not get hired in their field within six months after earning their degree, TSTC will refund their tuition.