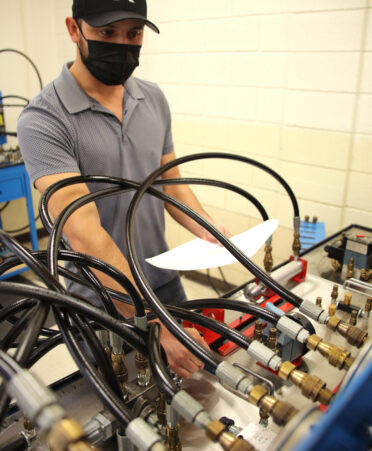 He could not have dreamed that one day he would have a job with aerospace manufacturer SpaceX.

“I was very curious how things worked mechanically,” he said. “I was that child who pulled it apart and put it back together.”

Juarez, who is a machine shop supervisor at the SpaceX launch facility in Brownsville, is pursuing an Associate of Applied Science degree in Mechatronics Technology at TSTC’s Harlingen campus.

He also earned a Combination Welding certificate at TSTC in 2009 and an Associate of Applied Science degree in Welding Technology the following year. He earned a Machining certificate in 2011.

Juarez’s experiences in both TSTC’s Welding Technology and Precision Machining Technology programs paved the way for his future career success.

“I was hired as a lab assistant in the Welding Technology program while I was enrolled as a student,” he said. “The instructors gave me an opportunity to assist my classmates. My career would not be where it is today if it was not for those programs.”

Juarez was hired as a computer numerical control (CNC) machine operator with General Electric Aviation in 2010. He held that position for six months before accepting the role of an engineering technician, which he had for eight years.

“The working culture at General Electric Aviation felt like a family,” he said. “That is what I really enjoyed about the environment.”

As an engineering technician, he designed fixtures that hold the parts for machining, welding and inspection. In addition, he programmed CNC machines that included electrical discharge machining, vertical mills, lathes and other components. Then he proceeded to program coordinate-measuring machines, which are intended to measure parts accurately.

In the next chapter of his career, he accepted a job as a toolmaker inspector with SpaceX.

“My role was to build tools that build rockets,” he said. “These tools must be precisely built, based on the engineers’ design specifications.”

After three months, he accepted a job as a machine shop supervisor at the company.

“I set priorities for jobs that are provided by the engineers,” he said. “I train toolmakers to utilize machines that cut parts for rockets, launch mounts, catching towers and rocket tooling. I also handle the procurement of machines and equipment needed for my team’s success.”

As a SpaceX supervisor, Juarez said he works with talented toolmakers and intelligent engineers.

“I always take my team to the work site,” he said. “I show them the parts we worked on and other components leading to the overall picture. For me — helping build the biggest rocket in the world and showing it to my team — it is really amazing what we have been able to accomplish in the short time the facility has been here.”

In Texas, electrical and electronic engineering technologists and technicians can earn around $69,000 a year. The number of these jobs in the state is expected to increase 8% by 2028.

TSTC offers Mechatronics Technology at the Harlingen campus, where students can earn an Associate of Applied Science degree or an Electromechanical Automation occupational skills award.