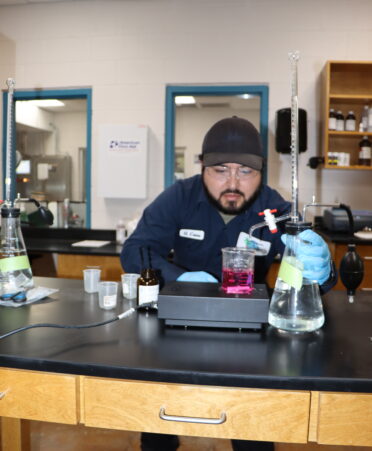 TSTC graduate thrives in career at city of San Benito

The Harlingen resident graduated with a certificate of completion in HVAC Technician from Texas State Technical College’s Harlingen campus in 2021.

Later Cano accepted a job at the city of San Benito.

“I am a water treatment plant operator for the city’s public works,” he said. “The job advertisement was based on laws of water and how it affects the atmosphere. I have TSTC to thank because of the education and schematics I learned.”

“What excites me is learning the process of how clean water is made for the city,” he said. “I have learned how chemicals can affect how potable the water is. There is always something new to learn every day on the job.”

Julio Gonzales, water treatment plant supervisor for the city of San Benito’s public works department, said Cano has demonstrated a positive drive during his employment with the city.

“His ability to learn from experienced fellow operators displays an overall compassion not only to be a part of the team, but to be a leader,” Gonzales said. “Mr. Cano has built a very good positive bond with all of our staff and myself included.”

Cano’s favorite memory of his days as a TSTC student was when the HVAC instructors persuaded him to pursue SkillsUSA, a competition for high school and college students.

“(Jorge) Salinas, lead HVAC Technology instructor at the Harlingen campus, and (Billy) Weaver, also a TSTC HVAC instructor and SkillsUSA advisor, guided me toward the HVAC advanced sections,” he said. “They suggested I review the electrician handbook and the codes for city gas lines to master my craft. It opened my perspective to a broader spectrum and made me successful.”

That motivation elevated Cano to place in the top nine at the 2020 SkillsUSA National Leadership and Skills Conference.

“It was such an amazing accomplishment,” he said.

On its Harlingen campus, TSTC offers an Associate of Applied Science degree in HVAC Technology and an HVAC Technician certificate of completion.

HVAC Technology is one of TSTC’s Performance-Based Education programs. PBE programs allow students to study both online and in person, at a flexible pace, and with a class schedule that can accommodate their lives outside of TSTC.

HVAC mechanics and installers can earn an average of $47,980 per year in Texas, according to the U.S. Bureau of Labor Statistics. These types of positions are expected to grow by 16% in the state through 2028, according to onetonline.org.