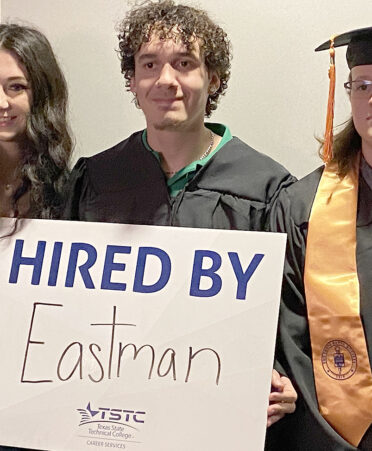 It was TSTC’s first in-person commencement event since fall 2019. Provost Barton Day said it was good to see students honored during the ceremony.

“It’s truly a thrill to have both students and families join us to celebrate our students’ success in a far more personal setting,” he said. “The class of fall 2021 is also the largest graduating class from the Marshall campus in recent years, with 84 graduates eligible to walk the stage.”

Some graduates of Process Operations have made plans to celebrate their accomplishments together.

“We are going on a cruise together next week,” said Hallsville resident Allison Weaver, who was president of the Phi Theta Kappa honor society chapter at the Marshall campus.

Weaver, along with Colin McGregor and Levan Stapleton, who each earned an Associate of Applied Science degree, will begin the new year together working for Eastman Chemical Corp. But first they will enjoy a celebratory cruise.

“This has been such a good year for me, and this has been the best school for me,” Weaver said. “I am so excited to be part of this group, and they will always be my friends.”

McGregor said walking across the stage was a surreal moment and he is grateful for the new friendships.

“I have made some lifelong friends, and I am looking forward to working with them at Eastland when we return,” he said.

Stapleton said he surprised himself during his time at TSTC.

“I did not know what to expect when I started the program, but now I have a career,” he said. “Having my family and friends watch me walk the stage is important because they helped me get to where I am now.”

Shane Nunley, who also earned an Associate of Applied Science degree in Process Operations, said he made the decision at age 50 to begin a new career.

“I had my own business and decided I wanted to do something else,” he said. “It paid off for me because I kept up my grades, worked hard and graduated.”

Nunley said the only thing he wishes could have happened during graduation was for his late parents to have watched him earn his degree.

“But my kids are able to see me do something special tonight,” he said.

Jada Reaves, who earned an Associate of Applied Science degree in Process Operations, decorated her mortarboard with her accomplishments. It depicted a chemical plant with a woman holding both a wrench and a diploma.

“I want to show everyone that women can do anything they put their mind to, and that is what I did,” she said. “This has been a long journey for me, and it means a lot to be walking with my friends.”

Drew Cooper, who earned a certificate of completion in Welding Technology, said his hard work paid off after walking across the stage.

“I will have more of an advantage at work since I have this certification,” he said of his job as a custodian at Hallsville ISD. “It is great to earn this certificate and have the skills to do something to help others.”

Preston Emerson, who earned an Associate of Applied Science degree in Electrical Lineworker Technology, arrived from his job with Mesa Line Services in time to graduate.

“I am going to walk the stage and have to get right back to work,” he said.

“You are now a leader,” he said. “I want to challenge you to be part of whatever community you live in.”

Registration for the spring semester at TSTC is underway. For more information, visit tstc.edu.