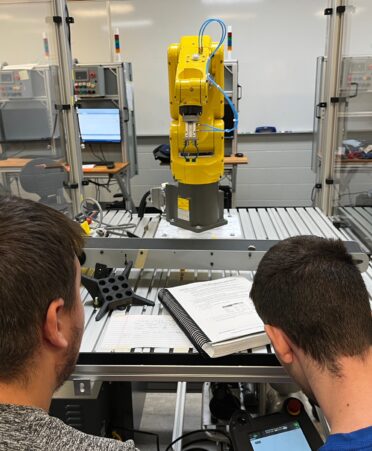 (WACO, Texas) – Justin Meckel is already getting valuable work experience even though he is in his third semester in the Robotics and Industrial Controls Technology program at Texas State Technical College’s Waco campus.

He works as a warehouse technician and robot supervisor at Sherwin-Williams Co.’s distribution service center in Waco. He said experiencing the classroom lessons has helped him better understand how robotics works while on the job.

Meckel, of Waco, previously received an Associate of Applied Science degree in Gaming, Graphics and Simulation Programming at TSTC. He said the work in this program has helped him in Robotics and Industrial Controls Technology, particularly when dealing with programmable logic controllers.

“Automation has and always will be the future,” Meckel said. “We use it in everyday life.”

Corey Mayo, an instructor in TSTC’s Robotics and Industrial Controls Technology program, said students who like using their hands, have a strong curiosity to know how things work and have some programming experience can do well in the program.

Clayton Christensen, an instructor in the program, is happy to see how its students have progressed. He said the goal is for them to graduate and get well-paying jobs in their field.

Representatives from Texas Instruments visited TSTC’s Robotics and Industrial Controls program, along with others at the college, in late June and interviewed about 20 students in a two-day period, according to TSTC’s Career Services department.

“We should see the whole (third-semester) class hired when they graduate,” Christensen said.

Lexy Reil, director of economic development for the Greater Waco Chamber of Commerce, said the demand for workers with automation and robotics skills remains high at both new companies and existing businesses in the area.

“Automation and robotics continue to play a strong role in the world of manufacturing,” Reil said. “Looking at the companies choosing to relocate and expand in the greater Waco region, the investments in these systems are significant. The workforce needs of these companies have evolved.”

“TSTC’s ability to upskill incumbent workers and serve as a pipeline of ongoing talented individuals makes it an essential asset to Waco and Texas,” she said.

Michigan-based Altron Automation, which has field service and technician workers based in Texas, is a custom-manufactured automation machinery company working with the advanced manufacturing, alternative energy, automotive and other industries. The company is currently seeking workers.

“Like every industry, it has been tough for us to fill automation and robotic engineering and technician roles,” said Stephanie Darling, the company’s human resources manager. “There is a high demand for these skill sets, and it is continuing to grow with more and more robots being added into manufacturing applications. This is a great industry and career choice for someone who is looking to be on the cutting edge of technology and thrives off of innovation.”

According to the U.S. Department of Labor’s O*Net OnLine website, robotics technicians earn an average median salary of more than $61,000 in Texas. More than 1,800 workers are predicted to be needed in the state by 2028, according to the website.

TSTC offers an Associate of Applied Science degree and certificate of completion in Robotics and Industrial Controls Technology at the Fort Bend County and Waco campuses.

Registration continues for the fall semester at TSTC. For more information, go to tstc.edu.