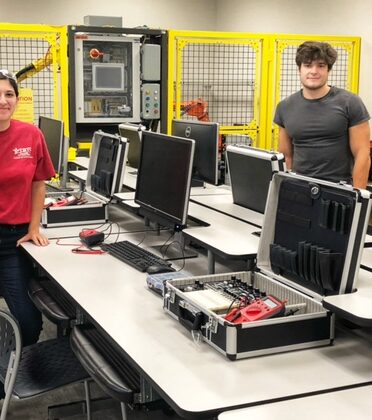 The program is slowly relocating from its longtime campus location in the Electronics Center into space being remodeled in the Dr. Roy G. Dugger Center, which is next door. The move is scheduled to be complete by the end of the month.

“We have been in 1,300 square feet of space since the late 1990s,” said Brian Reeves, an instructor in TSTC’s Robotics Technology program. “Now we are going into 3,000 square feet with the new classrooms combined.”

The growth is needed because of an increase in students. The program has 80 students this semester, Reeves said. The program has also grown in equipment, including seven robots more than it had in 2014. Reeves said there is also a higher demand for workers with expertise in all facets of robotics.

Functionality has been a theme during the planning for the new learning space. Reeves said one classroom will be used for two classes each during the first and second semesters and for fifth-semester students’ final projects. The room will have two industrial robots used for palletizing. Separating this and a second classroom is a large storage room in which Reeves said racks will be installed.

A third classroom will be used for a program class that will debut in fall 2022 and focus on motors and drives. Reeves said the class will be added to teach students skills to be more compatible with industry needs.

The fourth classroom will become a fabrication shop containing 3D printers and other equipment to create parts for robotic cells.

All of the classrooms will be connected by interior doors.

Students are excited about the move and the program’s future.

“It will be nice to have lots of space to stretch out and do our projects,” said Kayla Schescke, a TSTC Robotics Technology student from Temple.

After graduation, she wants to work at Gigafactory Texas, an automotive manufacturing facility now under construction by Tesla in Austin.

Alec Dean, a TSTC Robotics Technology student from Temple, said he looks forward to more room to practice troubleshooting and wiring robots with the precision his instructors have taught him.

“We learn how to think differently,” he said.

After graduation, Dean wants to work as a robotics technician.

TSTC offers an Associate of Applied Science degree in Robotics Technology at its campuses in Fort Bend County and Waco, and an Occupational Skills Award in Basic Electromechanical Automation – PLC at its Harlingen campus.

Robotics Technology is part of TSTC’s Money-Back Guarantee program, which enables students who do not find a job in their profession within six months of graduation to have their tuition refunded. The program is administered by TSTC’s Career Services department.