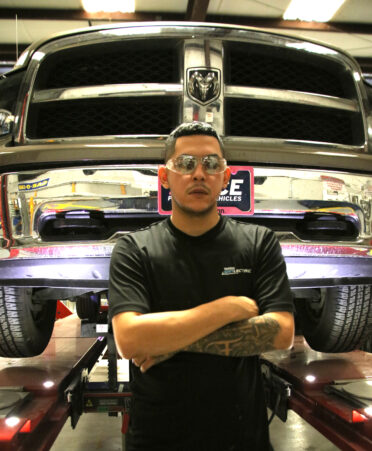 (HARLINGEN, Texas) – What some see as a wrecked car, Juan Medina sees as a worthwhile challenge.

Medina is sharpening the skills needed to restore damaged vehicles to their former glory by earning a certificate of completion in Auto Collision and Management Technology at Texas State Technical College’s Harlingen campus.

Additionally, the Brownsville resident has contributed several of his family’s personal vehicles to TSTC for educational purposes, with the approval of TSTC Auto Collision and Management Technology instructor Jose Vasquez.

“As long as the work is related to student learning outcomes, it’s acceptable,” Vasquez said. “This helps the students exceed their learning skill because it’s a live project.”

Medina said his intention was to motivate his fellow classmates.

Medina elaborated on what inspired him to learn more about automobiles.

“My grandfather is a mechanic, and I chose to follow in his footsteps,” he said. “Then my neighbor introduced me to several components involved in auto body when I was 15 years old. That knowledge grew when I took automotive and auto body classes at Hanna High School. My father, who is a U.S. Navy veteran, suggested I enroll in TSTC’s auto body program.”

“I competed in the Collision Repair Technology category, and I earned a bronze medal,” he said. “It felt amazing.”

Medina added that his program experience has been rewarding.

“I have enjoyed learning more about the welding side of auto collision repair because I was lacking in that area,” he said. “My instructors have taught me better techniques with fabrication, such as how to paint correctly and how to remove dents using a stud gun.”

“Juan’s leadership and mindset to help his peers has definitely improved both of their skills,” he said.

Automotive body and related repairers can make a yearly median salary of $46,390 in Texas, according to onetonline.org. The number of these jobs in the state is expected to increase 14% by 2030.

TSTC offers several Associate of Applied Science degrees in Auto Collision and Management Technology, as well as certificates of completion and an occupational skills achievement award.