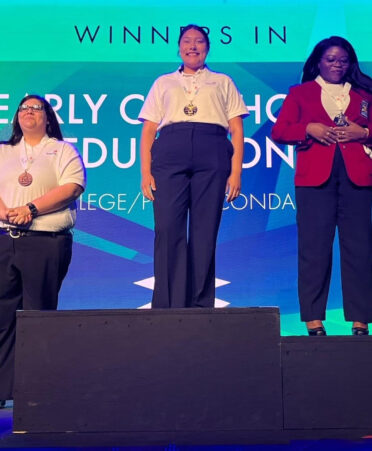 “Witnessing their passion and commitment in their respective fields and having the opportunity to showcase their skills and talent learned at TSTC is part of what SkillsUSA is all about,” she said. “Our medal recipients were excited to be recognized as the best of the best.”

Garcia, who recently completed an Associate of Applied Science degree in Education and Training, said she was filled with happiness to be announced as a gold medalist for TSTC.

“Myself and my fellow competitors were on stage to hear the final results,” Garcia said. “Then they announced the bronze and silver medalists. I was happy to hear my name as a gold medalist.” 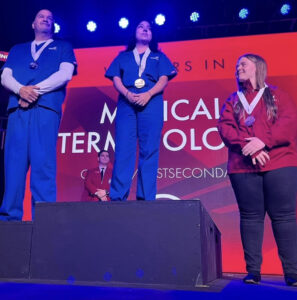 Salinas, who is pursuing a certificate of completion in Vocational Nursing, said he was proud to be a silver medalist and to represent TSTC.

“This is an incredible achievement,” Salinas said. “Next year, that gold medal will be mine.”

Garcia said her category of the competition included a written exam based on knowledge of child development and effective teaching strategies.

“We were informed to create a lesson plan, a transition activity, a read-aloud to demonstrate in front of the judges, and we were interviewed,” she said. “This competition level was a bit intimidating because I was competing with the best from different states. I had a strong feeling I was going to be a finalist after I completed my competition.”

Salinas said his approach for the competition was speed.

“I knew if I could catch keywords as I read each question and eliminated answers I did not need, then for sure I had it,” he said. “Flash cards were my tools to master the speed for this test. Anatomy and physiology, medical math and pathophysiology played a big role for nationals. The test was 200 questions with a two-hour time limit.”

Garcia added that her SkillsUSA advisor, Myriam Aguila, was the key to her success.

“She is a role model,” Garcia said. “She has a huge passion for teaching and inspired me to possibly teach abroad one day.”

“I advised her to be confident, knowledgeable, passionate and enthusiastic about her performance,” Aguila said of the SkillsUSA national competition. “I suggested … to imagine a class of students was in front of her at all times.”

Salinas noted that he is thankful for his SkillsUSA advisor’s contribution.

“(Beyda M.) Ramirez’s knowledge is amazing,” he said. “Her goal is to witness her students succeed. I am grateful she witnessed my achievement.”

Ramirez, a TSTC Health Information Technology instructor, said her focus was to make sure that Salinas understood the many areas covered in the Medical Terminology competition.

“I advised Raymundo to rigorously prepare because the medical terms are the foundation of my Medical Terminology course,” she said. “It is composed of prefixes, suffixes and combining forms. That helped him better understand the medical language and the systems. Most importantly, that contributed to him winning a silver medal at the SkillsUSA national level.”