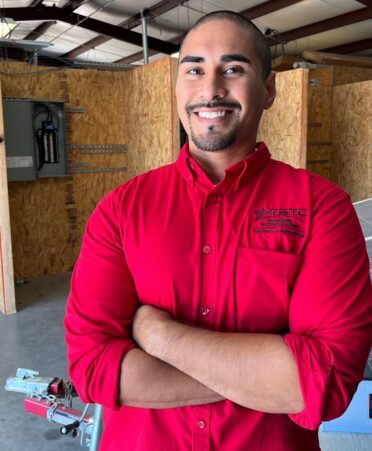 (WACO, Texas) – Christopher Sereno, of Killeen, is a third-semester “Triple Crown” student at Texas State Technical College’s Waco campus. He is pursuing the Associate of Applied Science degree in Solar Energy Technology and certificates of completion in Electrical Construction and Energy Efficiency Specialist.

Sereno grew up in San Jose, California, and has an associate degree from American Military University.

It was cool growing up there. San Jose is the grandfather place of martial arts, which I have been doing as long as I can remember. I have done martial arts my whole life. I mainly do muay thai and jiujitsu. In 2009, I was trying to figure out myself and what I wanted to do. I went to college for a semester or two and studied criminal justice, and was competing here and there. In 2010, I was taking martial arts classes and working in global security at Facebook.

I have family members in the military. My grandfather was a merchant marine. In 2015, I joined the Army and went into the military reserves as a supply specialist but felt I could do more. I then joined the Active Guard Reserve. I flew out to Ohio with my wife and kids and got attached to a psychological operations battalion. I was there with them for less than a year. I reenlisted and went infantry. I was a dismount team leader. I got out of the military earlier this year.

I learned about TSTC from a friend of mine who is also a veteran. He said he liked the programs. The instructors have been in the field and can teach you from their experience.

How have you enjoyed your programs of study?

When I started at TSTC, I did not have any knowledge about solar energy. I knew how to turn the lights on and there was electricity. I am a hands-on learner, so I need to see it, have it explained to me and touch it. We use the National Electrical Code and learn the process for inspections. With my electrical classes, I have to continuously keep looking at my notes. In the solar classes, you learn the fundamentals and the instructors teach you how the process is. If it was not for the instructors, I would not be here.

What do you want to do after graduation?

I want to work at a solar farm in Killeen in installation and inspections.

What advice do you have for people interested in going to college?

Everything comes down to preparation. For those transitioning out of the military, when you are a year out, sign up for college and talk to advisors and see what you can do. I would start college as soon as possible so there is no delay. For recent high school graduates, be your own advocate. You graduated from high school, and your parents were there for you. When you graduate, you take care of yourself. Preparation is key to any success.

TSTC is proud to recognize National Hispanic Heritage Month, which takes place from mid-September to mid-October.