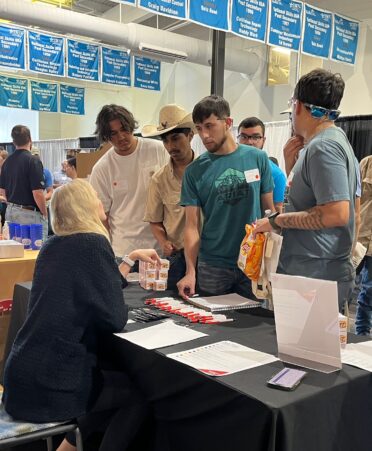 The event was spread out across campus to include the Col. James T. Connally Aerospace Center, the Industrial Technology Center and the Murray Watson Jr. Student Recreation Center. More than 170 companies were represented at the event, marking the largest jobs event that the college has ever hosted. Some students from TSTC’s East Williamson County and North Texas campuses also attended the event.

“They (the participating companies) see the value in TSTC and what we can provide them,” said Hannah Luce, director of planning and special events for TSTC’s Career Services department. “I am very happy with the turnout and saw constant student traffic.”

Some companies have been represented at the job fair before.

“They are in hot demand and hard to find,” she said. “Industry and service work has been looked down upon for a long time, but it’s time to change the narrative.”

Cepeda said the company will move in 2023 to Elgin.

“We would love to tap into the resources in East Williamson County,” she said.

Some companies were new to the event.

Nate Kvalheim, president of Kval Inc. in Hutto, said he was looking for students with electrical, welding and machining knowledge. The company strategically chose to build their new manufacturing facility across the street from TSTC’s East Williamson County campus to take advantage of its technical expertise.

“We want to be engaged with TSTC and build awareness of who we are,” Kvalheim said.

New Mexico-based Compa Industries Inc. was seeking students with knowledge in construction, engineering, facilities support and information technology. Trung Nguyen, a company recruitment manager, said it was hard finding workers in these fields because their work is very specific.

“Some are young, but they are eager,” he said about some of the students he met.

Students lingered at company tables talking to representatives while also picking up the occasional pieces of candy or branded ink pens and stress toys.

Ian Cales and Colton Jaster, both of Brenham, are Industrial Systems – Mechanical Specialization students at TSTC’s Waco campus. Both are scheduled to graduate in December.

Cales was attending his second TSTC jobs event this year.

“It’s nice being able to meet and mingle with people,” he said.

Jaster, who was attending his first TSTC industry job event, liked the experience. He prepared for the event by printing resumes to give to potential employers.

“I think it’s cool and awesome for students to have the opportunity to meet these companies,” Jaster said.

Jaxon Ambuehl, of Edgewood, is a Precision Machining Technology student at TSTC’s North Texas campus. Though he is not scheduled to graduate until December 2023, he said he made the trip to Waco with some of his classmates to experience his first industry hiring event.

“I think it’s good to see it all and figure out who is hiring,” Ambuehl said.

TSTC plans to have another Industry Job Fair in spring 2023.