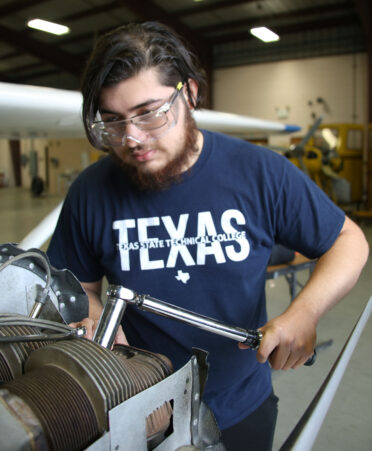 (HARLINGEN, Texas) – Learning about aviation pioneers such as the Wright Brothers, along with Charlie Taylor, the mechanic who helped build and maintain some of the Wrights’ engines and airplanes, provided the initial spark that got Texas State Technical College student Carlos Garcia interested in aircraft and flying.

Little did the San Benito resident know that interest would lead him to an education at TSTC’s Harlingen campus and interviews for potential careers with some major aviation companies.

“I always had an interest in engineering, physics and mechanics,” he said. “I wanted to study a subject that could get me into the aviation field. I was thrilled to learn that TSTC has an Aircraft Pilot Training Technology program, but it’s at the Waco campus. I realized the value of how TSTC can transform a student in two years to work on high-value, modern pieces of aircraft. So I enrolled in the college’s Aviation Maintenance program.”

The fourth-semester student said he learned about the job opportunities through the TSTC Career Services department.

“(One of the companies) offered a recruitment presentation at the Aircraft Airframe Technology program,” he said. “That is how I became interested in applying for jobs with other companies. I visited TSTC Career Services because they’re known for improving students’ resumes and offering additional resources to help us get hired. I’ve been receiving many calls for interviews since I submitted job applications.”

He said securing a job excites him because of the education that he has gained at TSTC.

“I’ve been preparing myself for nearly two years, and I’m close to making my passion a reality,” he said.

Garcia, who is scheduled to graduate in December, said his program experience has been rewarding.

“In Aircraft Airframe, I have enjoyed cutting and trimming sheet metal, and it reminded me of working in an industrial setting,” he said. “When we worked with wood fabric, that portion gave me an insight into how older aircraft were produced and fitted. It gave me an understanding of how aviation started with wooden structures and where it is now with sheet metal. In Aircraft Powerplant, I enjoyed assembling and disassembling engines and turbines.”

His future plans include moving up the career ladder and furthering his education.

“I would definitely like to travel for my job,” he said. “Down the road, I plan to study part time for a bachelor’s degree in engineering.”

Ramiro Chavez, a TSTC Aviation Maintenance lab assistant, said Garcia has impressive motivation to get a job done and do it correctly.

“With the skill set that he has developed, Carlos will be a valuable asset to any of those employers,” he said. “His leadership is impeccable because he takes full initiative and caution, just as every mechanic should in the aviation field.”

According to onetonline.org, aircraft mechanics and service technicians can earn around $66,710 a year. The website projected that there would be a 16% increase in the number of such jobs in the state from 2020 to 2030.

November is National Aviation History Month, which is dedicated to recognizing America’s contributions to the development of aviation.