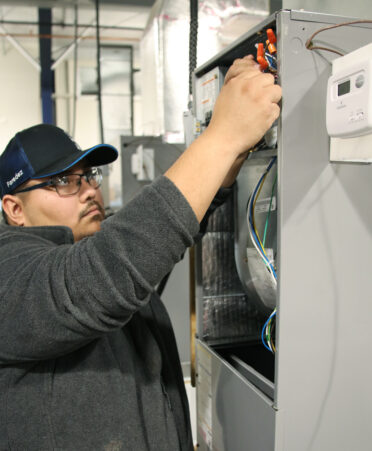 (HARLINGEN, Texas) – Challenges are the obstacles in life that demonstrate a person’s ability to thrive through any hardship.

Felix Paredez, of Harlingen, desired a career that would lead to a better life. Unfortunately he experienced financial and transportation challenges when his college education first began at Texas State Technical College nearly a decade ago.

“I had to leave the program in 2014 because I needed to improve life at home,” he said. “I was studying for an Associate of Applied Science degree in the HVAC Technology program.”

After his situation improved, Paredez made the decision to return to TSTC to finish his degree.

“I looked forward to learning how to fix an air conditioning unit and many other components in the program,” he said.

Paredez, who is projected to graduate in December, said his educational experience has been rewarding.

“I learned how to troubleshoot an air conditioning unit that has 240 volts,” he said. “With that unit, I discovered that the low-pressure switch was faulty. I disconnected what I needed to, took it apart and installed a new switch. Then it functioned correctly.”

Paredez said his instructors are excellent at their craft.

“My instructors’ teaching methods are very thorough,” he said. “I enjoy that because I’m a visual learner.”

He added that his instructors’ advice has been motivational.

“(Joe) Cabrera and Jose (Flores) told me never to let a personal situation beat you — you must overcome it,” he said.

Flores said Paredez is a go-getter who keeps himself engaged in the task at hand.

“Felix’s leadership shines when handling his daily duties and with his willingness to help his fellow students on difficult tasks,” he said.

As graduation nears, Paredez has demonstrated an interest in applying for a job with some local beverage bottling companies.

In Texas, heating, air conditioning and refrigeration mechanics and installers can earn an average annual salary of $47,980, according to onetonline.org, which forecasts the number of these positions to grow by 21% through 2030.

HVAC Technology is one of TSTC’s Performance-Based Education programs. PBE programs allow students to study both online and in person, at a flexible pace, and with a class schedule that can accommodate their lives outside of TSTC.