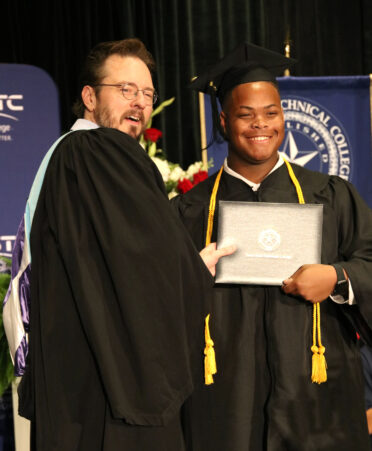 (ROSENBERG, Texas) – The Stafford Centre in Stafford was filled with excitement as Texas State Technical College’s campus in Fort Bend County celebrated the accomplishments of more than 100 graduates during the Summer 2022 Commencement held Friday, Sept. 9.

Each graduate shone with a sense of accomplishment as they walked across the stage, waved to their families and friends, and accepted their Associate of Applied Science degrees or certificates of completion.

Bryan Bowling, provost at TSTC’s Fort Bend County campus, welcomed the graduates and told them that every one of them has the potential to have a lucrative career.

“We view our mission at TSTC to be as much of a ministry as it is technical education and training,” Bowling said. “A great deal of pride and emotion goes into what we do. Every graduate can look out into the audience knowing that looking back at them are teams of individuals that are dedicated to their success.”

“Do not underestimate your soft skills, such as your work ethic and how you treat people,” he said. “Working hard and being kind is a good combination for a fruitful career. Use the skills that you have learned at TSTC to benefit you, and also use those skills for the betterment of others.”

Bryson Meyer, of Columbus, graduated with a certificate of completion in Electrical Lineworker and Management Technology. He became interested in the electrical lineworker field after speaking to friends who work in the industry.

“It’s a great feeling knowing I was able to learn what I did because it will help me earn a great-paying career in the next chapter of my life,” Meyer said.

Evelyn Haven, of Richmond, graduated with an Associate of Applied Science degree in Electrical Power and Controls. She pursued the program because she has worked on electrical projects with her father.

“I feel that I really accomplished something,” she said of earning her degree. “Not only is it great knowledge for the industry, but it’s also relevant to my life. I’ll be able to resolve my own electrical problems.”

Mason Rodriguez, of Houston, earned an Associate of Applied Science degree in Electrical Power and Controls. Rodriguez pursued the program because he had noticed the variety of the industry’s career paths.

“It feels great to graduate from TSTC,” Rodriguez said. “I’m going to earn a promotion at my job, thanks to my degree.”

Isela Martinez, of Katy, graduated with a certificate of completion in Structural Welding. She became interested in welding through her stepfather, who introduced her to various aspects of the field during her teenage years.

“My cousin motivated me to enroll because he was in the program,” Martinez said. “Now it feels amazing to graduate, and I’m going to celebrate with my family.”